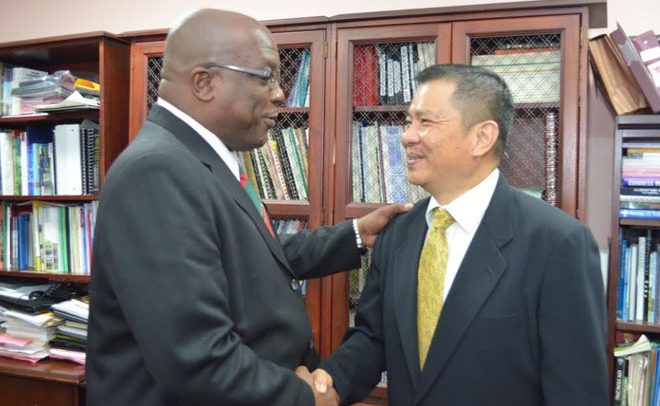 BASSETERRE, St. Kitts, August 1, 2018 (Press Unit in the Office of the Prime Minister) – Prime Minister of St. Kitts and Nevis, Dr. the Honourable Timothy Harris, personally thanked His Excellency George Gow-wei Chiou, Resident Ambassador of the Republic of China (Taiwan) to the Federation, for his commitment to the nation’s development and for his work to strengthen the ties between both nations.

Prime Minister Harris’ words of commendation came on Tuesday (July 31) afternoon during a cordial meeting with Ambassador Chiou, whose three-year tenure in St. Kitts and Nevis comes to an end this week. Also present at that meeting was Cabinet Secretary, Mrs. Josephine Huggins.

The Taiwanese Ambassador was assigned to the twin island Federation back in March, 2015.

While in St. Kitts and Nevis, Ambassador Chiou implemented and guided the completion of several successful projects and programmes that positively impacted several sectors including national security, health and education. These included the implementation of the nationwide CCTV Project, the expansion of the LED Street Light Project, mobilization of financial assistance for the construction of the National Heroes Park, the roll out of the Hospital Information System (HIS) at the JNF General Hospital, the implementation of a digitized Land Administration Information System (LAIS) in St. Kitts and Nevis, as well as the finalization of two solar farm projects.

“I want to say thanks to the ambassador for the many endeavours,” Prime Minister Harris said. “Thanks for the special support that he brought to us in the area of national security, particularly through the build out of phase one of the CCTV project. We are anticipating that phase two will start imminently. The matter of the public safety and security continues to weigh heavily on the minds of the people of St. Kitts and Nevis and we want to assure the people of St. Kitts and Nevis that the support that we are having from your government will be put to their beneficial use.”

Dr. Harris, who also serves as Minister of National Security, continued, “Whether it was the matter of transportation for our defence force, which you so graciously assisted in providing some new vehicles including specialized trucks for their assistance, or the CCTV programme, or the special interventions like the Dr. Chitan [social] interventions in St. Kitts and Nevis—in all of these matters where security came to the fore you were able to mobilize your government to render us wholesome support and we want to thank you.”

Ambassador Chiou, in response, said he will be leaving his post with very fond memories of St. Kitts and Nevis, as well as with bonds of friendship that he was able to forge during his three years in the Federation.

The Ambassador indicated that it is his belief that his government, through the Embassy of the Republic of China in Basseterre, will continue to work hand in hand with the St. Kitts and Nevis Government on other cooperative projects, particularly where national security is concerned.

Ambassador George Gow-wei Chiou will officially demit office on August 04, 2018, and will be succeeded by H.E. Ambassador Tom Lee.