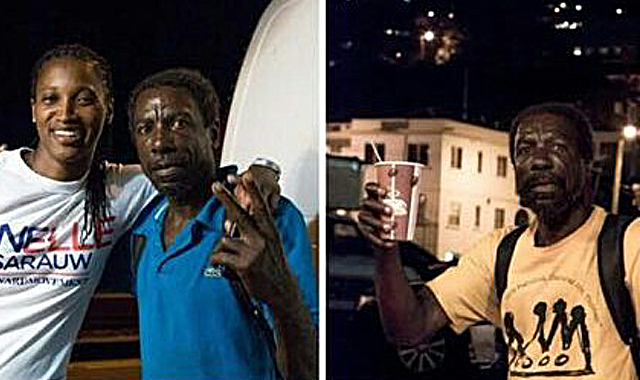 It is reported that ‘De Coach’, who sang the Boops song, was run-over by a speeding car and died near Griffith’s Park.

He is remembered in St. Kitts, especially for his 1986 Road March tune, Boops, and his tie with another calypsonian, Contender, who sang ‘Living in de Band’.

Nevisian Author and friend, Whitman Browne, wrote about ‘De Coach’ and their relationship.

“Last night, one of us was hit by a car and killed here on St. Thomas.  We were good friends, and I will miss him.   His calypso name was COACH.  Right now I cannot remember his official name.  Some years ago, many who follow the calypso art in SKN, will remember that Coach beat the best in SK, and won the Road March.

“However, my friendship with Coach was not based so much on his ability as a calypsonian.  We became close friends when certain persons here on St. Thomas, V I, used their connection in government to have him arrested and charged wrongfully.  Coach sat in prison here for more than a year, because an evil woman, who had a high position in government hated him, and he was born in SKN.  Not only was Coach put in prison,  but the equipment he used to earn a living was deliberately smashed, by orders of the said evil person.

“While Coach was in prison, I visited him regularly.  I also published a newspaper article about his illegal arrest.  As expected, I too attracted the venom of that evil woman.  However, she soon discovered that I was not as easy a target as Coach, to pick on.

“Meanwhile, everything possible was done to get Coach from prison.  Eventually, he was simply released of the charges, since they could not be corroborated by anyone.  In my many conversations with Coach, particularly while in prison, I was amazed at the clarity of his thinking, his business sense, and his all-round view of the world.  Despite his unsophisticated approach to life,  Coach was not a fool.

“Coach and I spoke by phone a few days ago.  It was evening, and his call surprised me.  However, we had our usual chat.  He related some new challenges with his business, and we talked about possible solutions.  Neither of us knew it was our last conversation.

“I met a friend from SK at the airport here, Sunday morning, April 1.  He had just got the sad news that Coach was run over by a car, and killed near Griffith’s Park, last night.   Both of us took that news badly.

“Coach was our friend.  We did not really get a chance to see him, grieve with him, or to  say goodbye.

“Yes, death comes like that at times, sudden, swift, and dramatic.  None of us really knows when it will visit.  But we all know it will come.  The challenge then to all of us, is to do as the Apostle Paul admonished in the Bible.  Despite our status in this life, because death comes, and comes, and comes again, “We should all walk circumspectly, not as fools!”

“Meanwhile, let us remember Coach. Let us sorrow with his family.  But above all, let us search and find that Hope which assures us, one day, death itself shall die!”