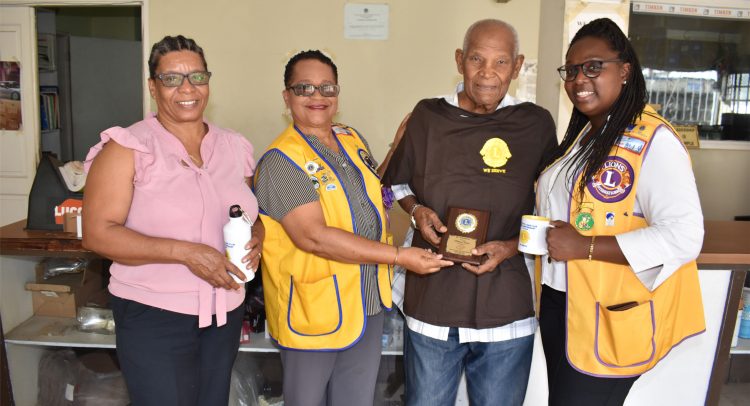 BASSETERRE, ST. KITTS, January 24, 2020 (MMS-SKN) — The Kitts (Basseterre) Lions Club, which celebrated its 40th anniversary in December, continues to honour individuals and institutions who would have given it support as it served the needy in the country during that period.

On Wednesday January 22, President Ms Charmaine Pemberton who was accompanied by past president Ms Adora Warner presented a plaque to Mr Richard Caines, and a certificate of appreciation and cheque to the University of the West Indies, Open Campus, St. Kitts Site in Fortlands.

“Mr Caines, we are here this afternoon to present this plaque to you on behalf of the St. Kitts (Basseterre) Lions Club in showing our appreciation for the past 40 years you have been with the Lions,” said Lion Pemberton as she made the presentation to Mr Caines at his office, Caines Auto Services, on Princesses Street in Basseterre. Also present was office manager, Ms Yvonne Browne.

A renowned businessman, Mr Caines was a Cabinet minister in the first government of Prime Minister Dr Kennedy Simmonds. At the St. Kitts (Basseterre) Lions Club’s 40th anniversary and awards giving dinner at the St. Kitts Marriott Resort in December, Mr Caines who was not present was recognised for being the most outstanding contributor over the forty years.

“Certainly I don’t really think that it is necessary for me to count what I gave to Lions or to anybody, because I gave from my heart,” said Mr Caines in reply. “I gave because I think that they are doing a wonderful job and serving a needy cause in the country. Therefore, all I can say to you is thank you very much for remembering Old Man Caines.”

At the University of the West Indies, Open Campus, St. Kitts Site, President Pemberton while thanking the centre for continued friendship, presented a certificate of appreciation and a cheque to the head, Mrs Gaile Gray-Phillip, observing that the club has in the last forty years been holding its twice-monthly meetings at the university centre.

President of the St. Kitts (Basseterre) Lions Club, Ms Charmaine Pemberton, noted that the club will continue honouring all its members and supporters who would have worked with the club in the forty years it has served the country and who were not present during the 40th anniversary and awards giving dinner. She pointed out for example that only two of its charter members were present at the 40th anniversary dinner.