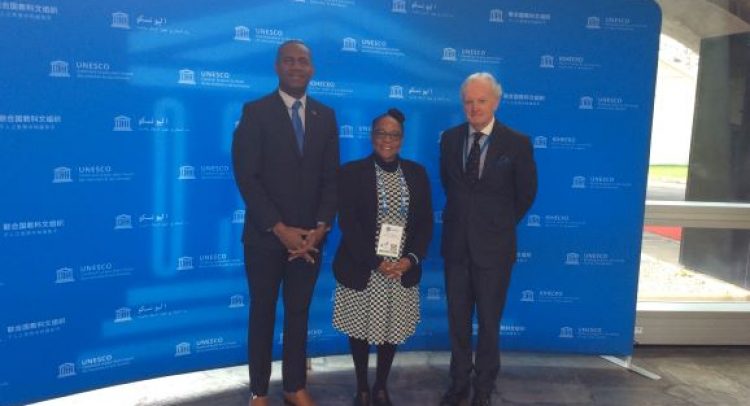 Basseterre, St. Kitts, May 04, 2021 (SKNIS): The Government of St. Kitts and Nevis deployed a strong ministerial presence at a recent Latin America and the Caribbean water security conference hosted virtually out of UNESCO’s Regional Bureau for Sciences in Montevideo (Uruguay).

St. Kitts and Nevis was elected vice-president of the 14th Meeting of National Committees and Focal Points of the UNESCO Intergovernmental Hydrological Programme (IHP) in Latin America and the Caribbean (IHP-LAC), which took place between 26th – 28th April 2021.

The meeting was attended by ministers, government water experts from across the region, presidents of the IHP National Committees and the Focal Points, NGOs, with the participation of the regional water community at large.

Prime Minister Harris was quick to remind an audience of international water decision-makers that the event was particularly timely as Latin American and Caribbean states all struggled to deal with the effects of Covid-19, accompanied by water shortages:

“The Covid-19 pandemic is, sadly, expected to trigger a severe economic contraction in Latin America and the Caribbean. It has also raised the level of urgency surrounding water security and hygiene to new heights of policy attention”.

“It would be remiss of me to not mention the Caribbean small islands, encircled by marine water.  Saltwater intrusion into groundwater resources is a problem we must guard against it if we are to ensure access to safe water in a sustainable way”.

Joined by national water policy experts from the IHP Focal Points of St Vincent and the Grenadines, Guyana, and Trinidad and Tobago, Minister Richards stated: “This is a timely opportunity, thanks to UNESCO’s Montevideo Regional Bureau for Sciences, to bring the Caribbean water policy community together in recognizing the urgent need to prioritize the sustainable management of water resources in the Caribbean. There is a pressing need to reinforce human and institutional capacities of the Caribbean water sector, via UNESCO/IHP’s input on scientific knowledge, methodologies and resilient water ITC-based management tools, and other relevant partners”.

Minister Richards, referring to St. Vincent and the Grenadines’ continuing hardships in the face of a series of relentless volcanic eruptions, noted that the resulting shortages of clean drinking water had reinforced the additional urgency to address water security policy at the Caribbean regional level.

“The challenge to ensure access to good quality water in SIDS is thus serious. Consequently, an urgent need has arisen to address these water challenges by identifying priorities for action at the highest political level, by building on existing partnerships at multilateral and bilateral levels”, noted Minister Richards.

He called upon all the Caribbean states to join in identifying ways in which support can be galvanized from UNESCO, UNEP, the World Bank, the EU, and specialised NGOs, to strengthen the Caribbean SIDS scientific, technical, and policy capacities to achieve immediate and urgent goals in three areas: enhance water security and supplies, improve water quality and waste-water management and promote safe reuse of waste-water, ultimately contributing to enhanced water and food security.

Dr. David Doyle, the Federation’s Ambassador to UNESCO in Paris, who facilitated the Federation’s involvement in the Latin America and the Caribbean water security conference noted: “This was a significant event at the regional level, pioneered with UNESCO IHP’s office in Montevideo, with a strengthened presence by the Government of St. Kitts and Nevis, to address the perennial challenges of water shortages across the region, with the scientific guidance of UNESCO-IHP”.