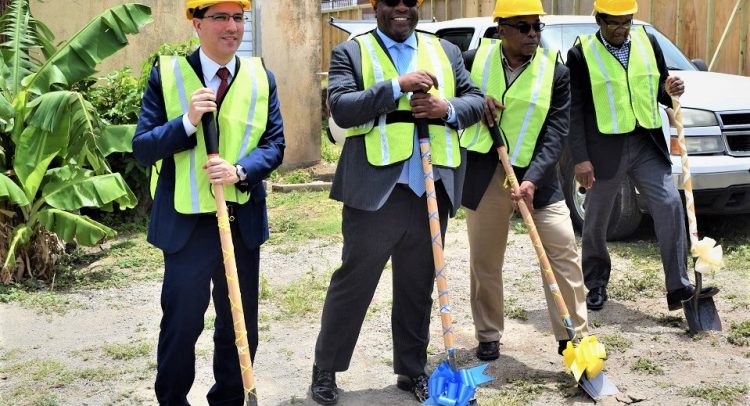 St. Kitts-Nevis government thanks Venezuelan Government for partnering with its social programme of providing homes Basseterre, St. Kitts, June 28, 2018 (SKNIS):  The Government of St. Kitts and Nevis has expressed its gratitude to the Government and people of the Bolivarian Republic of Venezuela for partnering with it under the social assistance initiative in providing homes for those in need.

Constituency representative for East Basseterre, The Honourable Ian “Patches” Liburd, at an official and symbolic turning of soil ceremony held on June 28, expressed his sincere thanks to the Bolivarian Republic of Venezuela through Petrocaribe for the support of 60 two bedroom condominium style houses to be built at Wellington Road, Basseterre.

“I want to thank the president, foreign minister and people of Venezuela for continuing to assist us,” he said, while noting that the government had a commitment to improve the living conditions for the people in East Basseterre, which is now being made possible with the help of Petrocaribe.

Minister of Human Settlement, the Honourable Eugene Hamilton, said that the project is a part of a social housing programme and through the assistance of Venezuela, the project will help to improve substantially the lives of the persons living in East Basseterre.

“I thank the Bolivian Republic of Venezuela for its significant contribution to this project. The overall housing project of the government involves what we are doing in HELP where hundreds of persons get grants up to EC$10,000 because we believe in sharing what we have with those persons in need. I must add that right here in this project, 60 families will benefit,” he stated.

General Manager of the National Housing Cooperation, Mrs. Elreter Simpson-Browne, said that the NHC continues to fulfill its mandate of improving and adding to the housing stock in St. Kitts.

“I can say today to you the occupants that your cries and complaints of the deplorable conditions of these [houses] have not fallen on deaf ears,” she stated, as she commended the Government of Venezuela for its willing partnership with the Government of St. Kitts and Nevis and NHC on this project. She also thanked Minister Liburd for his dedication for delivering on a promise made to the people of East Basseterre.