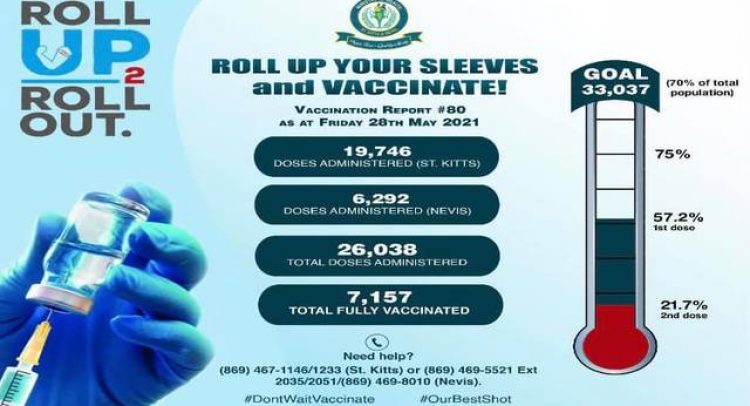 St. Kitts & Nevis is getting there!

As the smallest independent nation in the world, there is no doubt that fighting the Coronavirus has been a challenge.
But yet, the country’s success in managing the effort has been admirable.

As other small and developing nations have found, this is one fight that you have to almost wage on your own. No rescue plan from the so-called more developed countries that have largely adopted an “every man for himself” approach.

But yet, except for one other, St. Kitts and Nevis has protected its citizens from COVID-19 deaths.

Thanks to the governments of India and Dominica, St. Kitts & Nevis was able to begin its vaccination program back in February this year.

At a time when the country was struggling to find more doses, it borrowed a page from the spirit of goodwill exhibited by Dominica and India. It offered another developing Caribbean nation, Grenada, a portion of doses to help that state launch its own inoculation exercise.

The doctors in St. Kitts and Nevis always warned that despite the impressive record of battling the virus, one day, things would get worse. And it did a few weeks ago.

However, what little St. Kitts and Nevis is again demonstrating, is that it is, a fighter.

A recent cluster of cases sent shockwaves across the nation. But the two islands have not surrendered. They are continuing to fight and doing so against all odds. Some obstacles brought about by the virus and others man-made.
But as of Friday, 28th May, 2021, some 16, 036 people had been tested. knowing the population size of the country, that’s a significant number, out of 54,000 inhabitants.

And the efforts are continuing over this weekend.

About 15, 690 tests have returned negative, while results are pending for eight others.

There have been 68 confirmed cases since March, 2020, 45 of which have fully recovered.

That leaves another 23 who are being treated and awaiting their fate. These, as a precaution, remain in isolation.

Since the first confirmed case 14 months ago, 10, 025 people have been released from quarantine.

But since the recent outbreak, the quarantine figures have shot up again, with 697 being confined to their homes and 411 in an approved facility.

Before the arrival of vaccines, the country led its war using non-pharmaceutical measures, including mask-wearing, social distancing, and hand sanitizing or washing.

Now, the Oxford/AstraZeneca vaccine has been introduced for the last 4 months, (almost). It has been a tough road to herd immunity of 70% of the country’s adult population, but this small Caribbean “giant” is fighting hard and punching above its weight.

It has not been without criticism, some valid and others not fully understood. Yes, those who claimed that there ought to have been a better pre-vaccine information campaign, are right.

But since February that has changed. Town hall meetings, special information clinics, media interviews, social media advertising, radio and television adverts, and much more have materialized.

Another claim related to the lack of political consultation across the aisle, and that too had validity.

But now the race to 70% is one that requires “an all-in effort”, says government and medical experts.

But, the country is getting there. Not as fast as former World Champion, Kim Collins, once ran, but it’s edging to the finish line.

Some have been hesitant. Medical conditions of various types have been advanced. Fear of needles, and uncertainty about the efficacy of the vaccine, also advanced as a reason not to Roll up to Roll Out.

But others have simply expressed their desire not to take the vaccine. Some with no reason and others object to the style of the campaign.

Despite all those challenges, St. Kitts and Nevis is marching on, (it seems). Its target of October for herd immunity seems unlikely, but perhaps 2022 would dawn with brighter prospects. One cannot rule out a Christmas gift wrapped in a package labeled, ‘herd immunity’.

To date, as of Friday, 28th May, 7,157 fully vaccinated people, or 21.7% were recorded. Hundreds more are heeding the call and are heading to the health centers. That’s great news.

Like the Maestro, King Ellie Matt, once sang, Viva St. Kitts! But have no worry, because Nevis too will be nice!