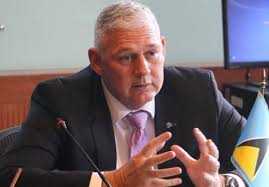 St Lucia to be removed from EU blacklist

St Lucia will join its Caribbean neighbours Barbados and Grenada in being removed from a list of tax havens drawn up by the European Union.

The Reuters news agency said it had seen an EC document last week indicating that Bahrain, the Marshall Islands and St Lucia will be removed from the list.

It said that the latest decision was taken by the EU Code of Conduct Group, which includes tax experts from the 28 member states.

The EU finance ministers are expected to endorse the proposal at their regular monthly meeting in Brussels on March 13.

Last week, Caribbean Community (Caricom) leaders who met in Haiti for the 29th inter-sessional summit, called on their finance ministers and central bank governors of the region to meet “expeditiously” to consider new proposals as regional governments continue to react to decisions by Europe in listing some countries as tax havens.

The communique issued at the end of the summit noted that the proposals on a Caricom Strategy had been prepared by a Caricom Technical Working Group.

Trinidad and Tobago Prime Minister Dr Keith Rowley, whose country remains the only Caribbean nation on the EU blacklist, told reporters last week that the regional countries were being “threatened” by the unilateral decision of the European Union to “blacklist” several islands even as the region has tried to comply with the necessary legislative requirements.

According to the communique, regional leaders “deplored” the significant reputational damage inflicted on member states from their inclusion in the list of ‘non-cooperative tax jurisdictions’ published by the European Union Council in December 2017 as well as other unilateral processes which label member states as ‘tax havens’.

The three countries to be delisted next week are reported to have made “specific commitments” to adapt their tax rules and practices to EU standards, according to the EU document.

All delisted countries have been moved to a “grey list”, which includes dozens of jurisdictions that are not in line with EU standards against tax avoidance but have committed to change their rules and practices.

UN: Myanmar should be investigated for crimes against Rohingya