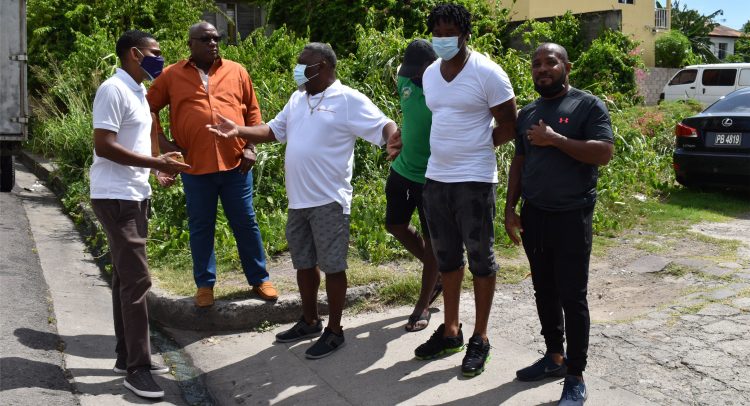 “I think with coming on stream of the traffic lighting, the freeing up here becomes especially important,” said Prime Minister Harris as he stressed the importance of the bus stop moving from the College Street Ghaut.

Government side pointed to an abandoned plot between College and Market Streets, just above the current bus stop, while the association talked of the Basseterre High School which they said had the necessary infrastructure to facilitate them and their passengers.

The Honourable Prime Minister advised them that the plot on College/Market Streets would have required buying out a number of persons with land as it was family owned. He noted that the Attorney General had approached the issue but since some of the family members are not on island, that slowed down the process.

“(Association President) Mr ‘Talbo’ Bass had an idea I think with respect to Basseterre High, so we can drive to that location, but first we look at the option here (College Street), then we go to Basseterre High and we discuss, and get some initial feedback,” said Prime Minister Harris.

After inspecting the College/Market Streets plot, they walked to the entrance of the Basseterre High School on Victoria Road, where Mr Austin Farier indicated that his department had done a plan for the location and that it could be presented.

“Refresh it and get some input from the Bureau of Standards because they will be concerned about environment and toxicity, and all those other issues have to feature into what we are doing so we enlarge the scope and bring in an independent person to have a look and to advise, and then we could use that,” Prime Minister Harris instructed Mr Farier.

In the meantime, St. Peter’s Bus Association President Mr Andrew ‘Talbo’ Bass advised that he would have looked at a few areas, and suggested that if they could use the Basseterre High School just at the entrance on Victoria Road, he said they could park up as they go in the gate, and bus number one would face out close the gate and the others to line up behind him.

“At the high school there are toilet facilities which we can use and there is the home economics centre right around there and they have a veranda which we could use, or if it is possible to get a door open where we could go in and relax, maybe play some domino while we wait,” said Mr Bass. “The other drivers have agreed to move to the Basseterre High School if government agrees. They are on board.”

“The Basseterre High School is closer to the heart of town than coming from Public Works where the East Line Bus terminal operates from,” said Mr Bass in reference to persons who are saying that the new location will be too far from town.

While viewing the Basseterre High School site, it was also noted that buses are able to drop passengers to their various locations in town while they are coming from St. Peter’s, but it would not be possible to pick up the same people from town as they prepare to return home from work.

Mr Austin Farier suggested that a transit bus could be deployed to take passengers to the bus terminals be it at the East Line Bus Terminal or at the Basseterre High School from town.

“That is the missing link for people,” said Dr Harris in agreement with Mr Farier’s suggestion. “We need a service and for me that is a new line of business for someone to make money.”

Prime Minister Harris instructed Mr Farrier to follow up the issue of the relocation to the Basseterre High School by members of the St. Peter’s Bus Association with the police and the Transport Board and to bring it to Cabinet for its final decision.