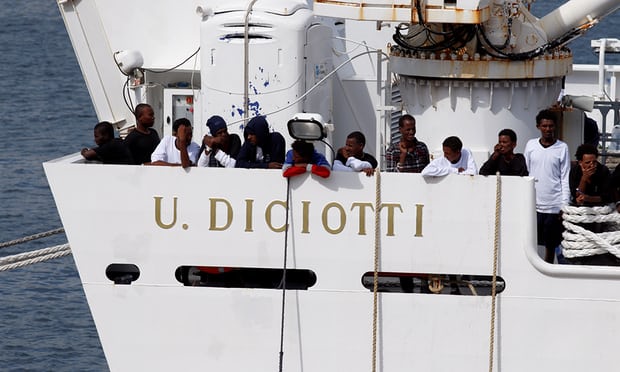 An Italian coastguard ship with 177 people on board remains docked in Catania, with Italy’s far-right interior minister, Matteo Salvini, refusing authorisation for the refugees and migrants to disembark.

The passengers, who have been stuck on the Ubaldo Diciotti for five days and arrived at the Sicilian port on Monday evening would not be allowed on land until “Europe steps in to help”, Salvini said on Tuesday.

The ship picked up 190 people last Wednesday from an overcrowded boat about 17 sea miles from the island of Lampedusa. Thirteen of them were evacuated for emergency medical treatment.

Rome insisted that Malta should take the group because their boat first passed through its search-and-rescue area, but Valletta refused, claiming the people wanted to reach Italy.

Questioned by the Italian authorities, the 13 people evacuated claimed the Maltese had escorted them outside its search-and-rescue zone, Rome said.

On Monday afternoon, after three days of negotiations, Italy’s transport minister, Danilo Toninelli, tweeted: “The Diciotti ship will dock in Catania.” Sources close to Salvini said the interior minister was treating it as a “technical stop”, not as a potential disembarkation.

Salvini said on Italian TV: “The ship may land in Italy, as long as the 177 migrants are distributed, in a spirit of solidarity by the EU.”

Fulvio Vassallo, an expert on asylum law from the University of Palermo, said Italy was facing the possibility of violating article 5 of the European convention on human rights.

“Everyone has the right to liberty and security of person,” he said. “This is an illegal detention and asylum seekers detained for more than 48 hours should be immediately release and should be given the opportunity to apply for refugee status.”

It is the third time the Diciotti has been prevented from landing migrants in an Italian port.

Last July, in Trapani, the disembarkation of 67 migrants from the Diciotti was eventually authorised after the intervention of the Italian president, Sergio Mattarella.

Most of the people on board the Diciotti in Catania are from Eritrea or Somalia.

“They need assistance as soon a possible,” Giovanna Di Benedetto, a spokeswoman for Save the Children, said. “Some of them have suffered several months, if not over a year, of imprisonment in Libya’s detention camps.”

Brussels said it was in talks with EU states but did not specify which capitals were involved.