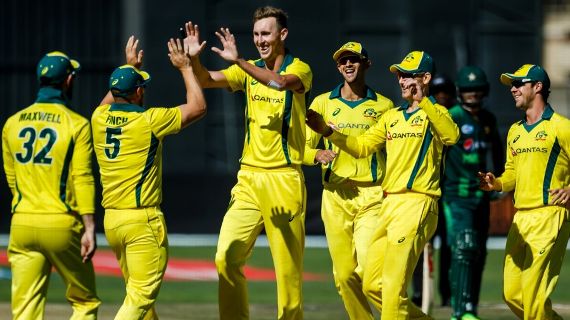 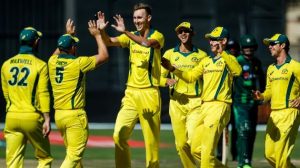 One centimetre taller than Joel Garner’s lofty 203, Billy Stanlake towered over Pakistan’s top order at the Harare Sports Club in a spell that delivered Australia their first international victory in any format since the Newlands ball-tampering scandal, by nine wickets with a gaping 55 balls to spare.

Making the most of what early-morning life existed in a dry surface, Stanlake blasted out the top-four Pakistani batsmen in a spell of 4 for 8, helped by three fine catches from his captain Aaron Finch, who had granted his young spearhead the chance to bowl first by winning the toss and kept him going for four consecutive overs.

The game was more or less decided by Stanlake’s burst, with all four wickets falling to catches behind the wicket. If Fakhar Zaman seemed nonplussed by his dismissal, adjudged caught down the leg side when attempting a hook shot at another high bouncing Stanlake projectile, then there was no broadcasting budget room for DRS to determine whether or not he was right to quibble. A pair of lbw appeals, by Jhye Richardson and Usman Khan, might also have attracted referrals.

Chasing a mere 117, Finch, D’Arcy Short and Travis Head galloped home, for a win so emphatic as to belie the fact Australia had lost eight matches in a row in all formats since Cameron Bancroft, David Warner and Steven Smith were mixed up in a ball-tampering plot against South Africa in Cape Town a little more than three months ago. With a 10am local time start, the victors were able to celebrate their result over lunch.

Stanlake’s impact was further evidence of his potential to become a major handful for all international opponents, following a similarly eye-catching display against England in the fifth ODI at Old Trafford in Manchester. Such was his steep trajectory that he made the Harare surface seem more reminiscent of the WACA Ground more than two decades ago – certainly Garner would have approved of the different game he compelled Pakistan’s batsmen to play.

Having trounced hosts Zimbabwe in the tournament opener on Sunday, Sarfraz Ahmed named an unchanged team to tackle the Australians. Finch’s XI featured the left-hander Nic Maddinson, who was included in the squad despite losing his state contract with New South Wales. Maddinson relocated to Victoria and will play for the Melbourne Stars in this summer’s Big Bash League.

Taking the new ball, Stanlake had to wait for only three balls before Mohammed Hafeez flirted fatally with a bouncing ball outside the off stump, sending a comfortable edge through to Finch at slip. In his next over, Hussain Talat was unable to ride the lift of another steepler, which took the shoulder of the bat and hung in the air just long enough for Finch to run across from slip and take a neat one- hander nearer to where gully might have been.

Zaman’s dissmisal in Stanlake’s third over will remain a matter for debate, as Alex Carey’s appeal from behind the stumps was met with an affirmative answer from the umpire Jeremiah Matibiri, but there was no doubt about the exit of Sarfraz, offering a slightly open defensive blade and edging in the vicinity of Finch for another alert snaffle.

The remainder of the innings was always going to be a faltering salvage operation, not helped by a horrid run-out when Shoaib Malik loafed the first run and was then stranded when he realised too late that a more industrious Asif Ali was eager for a second. Asif’s innings then ended when he completely misread the length of a Marcus Stoinis delivery, and though some late punishment was handed out to Andrew Tye, the West Australian still finished with a trio of mop-up wickets.

Finch and D’Arcy Short set out after their modest target as though eager for an early lunch, punching gaps in the field with something like impunity before the left-hander miscued to midwicket.

Head came in to provide all the support required as Finch closed in on the win with a succession of meaty blows, raising a half century from just 27 balls in the process. Zimbabwe, who already looked the third best of these sides by a distance, have been warned.