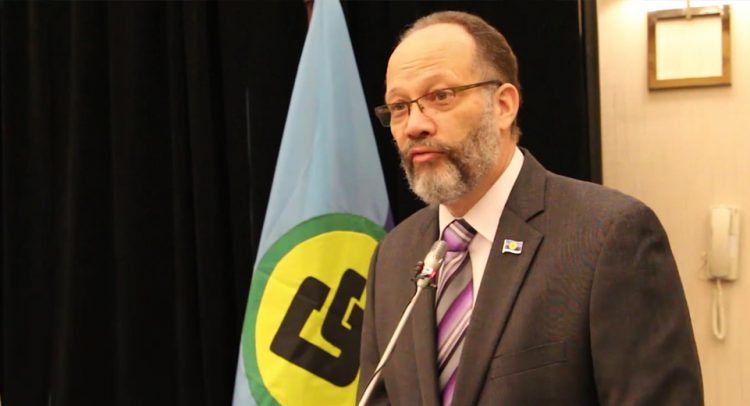 Statement by the Sec. General of the (CARICOM)

Secretary-General of the Caribbean Community (CARICOM), Ambassador Irwin LaRocque, on Monday 15 June, 2020 received the Report of the CARICOM Observer Team which observed the recount of the General and Regional Elections held in Guyana on 2 March, 2020.

The Team was led by Ms. Cynthia Barrow-Giles, Senior Lecturer in the Department of Government at the University of the West Indies (UWI), and included Mr. John Jarvis, Commissioner of the Antigua and Barbuda Electoral Commission and Mr. Sylvester King, Deputy Supervisor of Elections of St. Vincent and the Grenadines.

The Secretary-General thanked the team for the commitment, professionalism and integrity with which they undertook an arduous task over the past six weeks. Chair of CARICOM, the Honourable Mia Amor Mottley, Prime Minister of Barbados thanked the team for their service to Guyana and the wider Community, particularly being away from their families at this difficult time during the COVID-19 pandemic.

The Team arrived on 1 May for the recount exercise, which began on 6 May and ended on 9 June with the final certification.

The need for a CARICOM Observer Team was agreed upon by the leaders of the two main political parties in Guyana following their discussions with Prime Minister Mottley and Secretary-General LaRocque.

A Team was invited to scrutinise the recount by the Chair of the Guyana Elections Commission, (GECOM), Madame Justice (Ret) Claudette Singh.

The Report has been submitted to Prime Minister Mottley and to Madame Justice (Ret’d.) Singh.