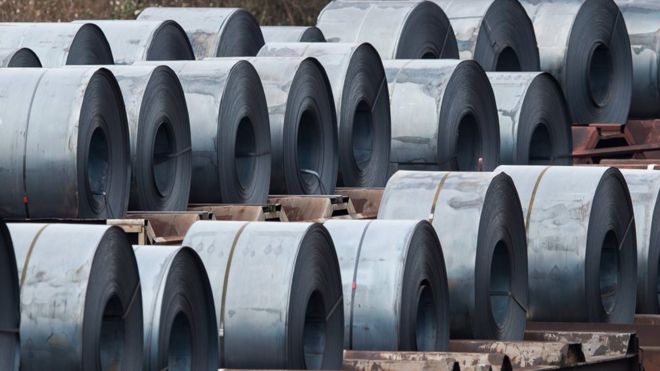 Steel tariffs: US chided over duties on imported metals 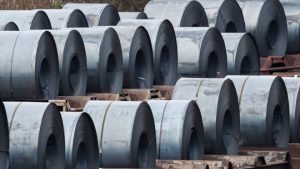 Major trading partners of the US have condemned President Donald Trump for signing off new tariffs on steel and aluminium imports.

China described it as a “serious attack” on the system of international trade.

French Economy Minister Bruno Le Maire said there were “only losers” in a trade war.

Mr Trump says the US has suffered from “unfair trade” and that the tariffs will boost US industry.

The import duties – 25% on steel and 10% on aluminium – will go into effect in 15 days, although Canada and Mexico will be exempt while negotiations continue over the North America Free Trade Agreement (Nafta).

Mr Trump signed the declaration in a White House ceremony attended by American workers from both industries.

What has the international reaction been?

China’s steel and metals associations demanded retaliation, urging the government to target US imports including coal, agricultural products and electronics.

Japan said the import duties would have a “big impact” on bilateral ties, while South Korea threatened to take the issue to the World Trade Organization.

Canada, the largest supplier of steel and aluminium to the US, welcomed its exemption but said it would continue to press Washington to drop the tariffs.

Mexico’s Economy Minister, Ildefonso Guajardo, insisted the tariffs could not be linked to talks on Nafta.

EU Trade Commissioner Cecilia Malmstroem tweeted that, as a close ally of the US, the bloc should be excluded from the tariffs.

The UK government said it would work with EU partners to consider “the scope for exemptions” while “robustly” supporting UK industries.

Australian Prime Minister Malcolm Turnbull said the US could have “no complaints” about their bilateral trading relationship and his government would be “relentless” in pursuing an exemption from the tariffs.

What about inside the US?

There was strong opposition from within Mr Trump’s own Republican Party, which is traditionally in favour of free trade.

Republican Senator Orrin Hatch, who chairs the Senate Finance Committee, said he believed the president had been “misled” by those advising him at the White House.

Another Republican Senator, Jeff Flake, said he would draft and introduce a bill to nullify the tariffs, adding: “I urge my colleagues to pass it before this exercise in protectionism inflicts any more damage on the economy.”

But those who backed Mr Trump’s move included Democratic Senator Joe Manchin who said it was “past time to defend our interests, our security and our workers in the global economy”.

Correspondents say Mr Trump is aiming to appeal to blue-collar voters in states such as Pennsylvania who turned away from the Democrats to support him in 2016.

Why did Donald Trump do this?

In his election campaign, Mr Trump pledged to protect American workers and to rebuild the steel and aluminium industries.

The two metals are “the backbone of our nation… the bedrock of our defence-industrial base”, the president said at Thursday’s signing ceremony.

Correspondents say Mr Trump is aiming to appeal to blue-collar voters in states such as Pennsylvania who turned away from the Democrats to support him in 2016.

UN: Myanmar should be investigated for crimes against Rohingya