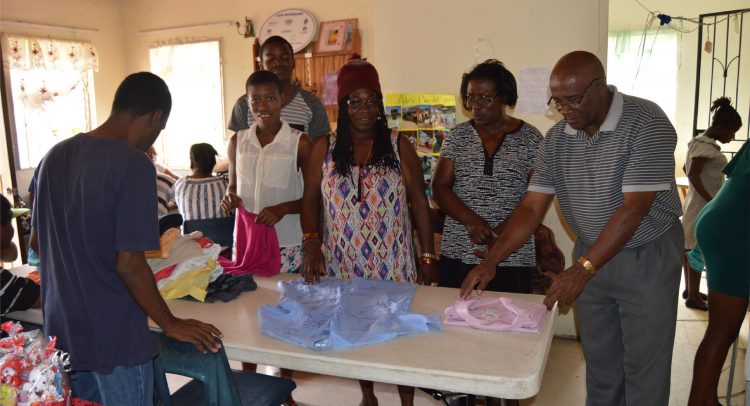 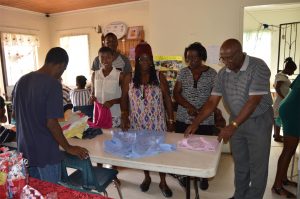 Basseterre, St. Kitts*, *February 12, 2018 (S.T.E.P.)* — Ade’s Place in Greenlands, Basseterre, is an institution that was established in 2005 with the help of a concerned parent, to fill a void and to provide a safe haven for adults with disabilities. Being a private institution where parents were expected to pay a stipend, enrolment was low.

But according to a member of Ade’s Place Board, Ms Clarice Cotton, enrolment at the institution has grown tremendously since last September after the Skills Training Empowerment Programme (STEP), a government agency under the Office of the Prime Minister, took on board the trainees in its national training programme where they are paid a weekly salary.

“We have always had a problem with the trainees paying a stipend,” observed Ms Cotton on Friday February 9 when she received the Director of the Skills Training Empowerment Programme, Mr Wendell Wattley, in her office.

She further stated that when Ade’s Place had seven trainees, the parents were reluctant to send their children to Ade’s Place after they graduated from the Cotton Thomas Comprehensive School (formerly the Special Education Unit). They preferred to either keep them at home or send them to McKnight where the St. Kitts Nevis Association of Persons with Disabilities runs training courses, also sponsored by STEP.

Ade’s Place has now been able to more than double the number of trainees, and that is as a result of STEP’s involvement.  As of September last year, eighteen trainees and two staff members were included in the list of persons being trained and paid by the STEP in its endeavour to offer quality training to everyone in the Federation.

“We have also seen a difference in the trainees, because they are now independent and according to them, they have their own money,” said Ms Cotton. “A lot of them are more outspoken, they are more confident, and we see even some of them paying for the Dial-A-Ride bus.”

Ms Cotton further revealed that parents have been reporting to the institution that STEP’s involvement with their children’s training is really making a difference as for years they (parents) have been the sole providers, “because many of the trainees come from single parent homes, and this is really, really helping them.”

Ade’s Place, according to Board Member Cotton, is also trying to train them in how to read their bank accounts, how to read the books so they know how much money they are earning and “we are talking about what they should buy at the end of the month and so on, so that we are helping to prepare them for independent living and the STEP and the stipend has really made a difference in what they are able to do.”

Before STEP came in, two of the teachers at Ade’s Place were paid by the Ministry of Education, while one volunteer teacher used to be paid by the National Skills Training Programme but did not receive holiday pay. TheSkills Training Empowerment Programme (STEP) is paying the salaries of an additional two teachers including the one who used to volunteer, which has made a difference in the institution’s operations.

Director of Skills Training Empowerment Programme (STEP) Mr Wendell Wattley stated that when he was approached to have the agency support Ade’s Place, there was no hesitation in his reply as “Ade’s Place is a skills’ enhancement programme and it is giving the children an opportunity to really enhance their skills, gain their confidence and also to gain a level of confidence and independence out there if and when they are called upon on to be on their own.”

He added: “It is a great pleasure for the STEP, myself in particular, to support this programme at Ade’s Place, and we look forward to building the programme and expanding it to reach more of the persons who are out there and are kept home. I think it is critical that as a country, St. Kitts and Nevis recognizes that our persons living with disabilities are also part and parcel of our Federation.”

According to Mr Wattley, persons living with disabilities “are critically part of our populace and we should not treat them any different than those who are more capable physically or otherwise, and so it gives me a great pleasure to really support the Ade’s Place programme and look forward for closer collaboration as we move forward.”

After Mr Wattley was informed that enrolment has further risen and that there are now 22 trainees at the institution and that some of them are not on STEP, he said that he would look into the possibilities of adding another five more on the programme.