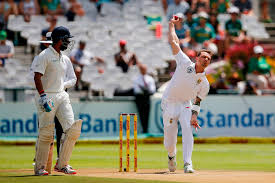 Dale Steyn has been included in South Africa’s Test squad to tour Sri Lanka next month. Steyn, who returned to competitive cricket for Hampshire six months after a heel injury saw him break down in the New Year’s Test against India, is three wickets away from breaking Shaun Pollock’s record as South Africa’s leading Test wicket-taker and will have the chance to do so in the two-Test series.

Kagiso Rabada, who was forced out of the IPL with a stress fracture, will be fit to return to action alongside Vernon Philander, as Lungi Ngidi replaced the retired Morne Morkel. South Africa included three spinners in their squad: regular specialist Keshav Maharaj was joined by left-arm wristspinner Tabraiz Shamsi, who has one Test cap to his name, and legspinner Shaun von Berg, who received his maiden Test call up.

In the batting department, AB de Villiers’ retirement created room for Heinrich Klaasen to remain in the Test squad. Klaasen, who will also act as back-up wicketkeeper, will compete with Theunis de Bruyn for a place in the line-up. Klaasen toured with South Africa to New Zealand in March 2017 and was part of the squad to play Australia in March, but is yet to play a Test.

Klaasen has played four ODIs and three T20Is for South Africa and earned an IPL deal with Rajasthan Royals for the 2018 season. He was not among the top 25 run-scorers in last season’s first-class competition but played seven matches, scored 426 runs and averaged 38.72 with two centuries and a half-century, and was preferred over the domestic tournament’s top three run-scorers Rassie van der Dussen, Vaughn van Jaarsveld and Pieter Malan.

The rest of the batting line-up takes on a familiar look, with Dean Elgar and Aiden Markram to open the batting and Hashim Amla holding the fort at No. 3. Temba Bavuma may move into de Villiers’ spot at No.4, unless captain Faf du Plessis opts to promote himself with the vacancy for de Bruyn or Klaasen at No. 6, if South Africa choose to play seven specialist batsmen. If they opt for six, Quinton de Kock will bat in the No. 6 position, with the bowlers to follow.

Notably, South Africa opted not to pick an allrounder in the squad, leaving no room for young Wiaan Mulder who was around the Test group last summer, and also limited their selection of quicks to four. That means there is scant cover if Steyn, who has been hampered by injuries for much of the last three years, or any of the other quicks breaks down.

Steyn has only just returned to first-class cricket and could feature in as many as three matches for Hampshire before the Sri Lanka tour. Originally, Steyn was only due to play in the ongoing fixture against Surrey, in which he has already bowled 26 overs and taken 2 for 91, but he will stay on after national team-mate Hashim Amla had to leave the squad with injury. Steyn is now also due to play in matches against Yorkshire and Lancashire, and in an interview with ESPNcricinfo at the weekend, he indicated his interest in playing Test cricket “for as long as I can”.

“It is very welcome news to have Dale back in our pack of world-class seamers particularly in view of the retirement of Morne Morkel,” Linda Zondi, South Africa’s convener of selectors said. “A key factor in our selection process was to cover all our bases and all possible conditions that we may encounter in Sri Lanka. The two additional spinners to back up Keshav Maharaj have both had excellent records in recent times in our domestic cricket. Von Berg also gives us additional batting strength in the lower order.”

While Shamsi only played four first-class matches last summer and took 17 wickets at 37 per piece, von Berg finished third on the wicket-takers’ list, with 29 wickets at 41.75. He was well behind the leading wicket-taker Simon Harmer, who took 47 wickets at 21.85, who chose to sign a Kolpak deal two years ago, and has since extended it until 2019, and could not be considered for selection.

South Africa will play a two-day practice match at the P Sara Stadium in Colombo on July 7 and 8 before the first Test in Galle from July 12 and the second in Colombo from July 20. They are yet to name their squads for the five ODIs and the lone T20I that will spill into August.