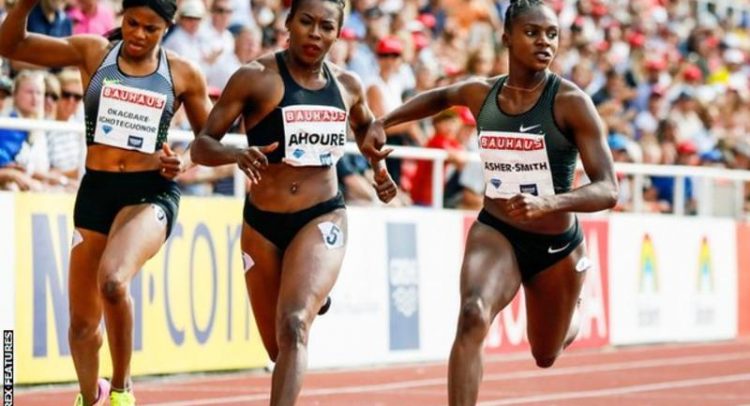 Dina Asher-Smith stormed to victory in the 100m at the Stockholm Diamond League meet, clocking just 0.01 seconds outside her new British record.

Asher-Smith, 22, clocked 10.92 in Oslo on Thursday, and followed it up on Sunday with victory in 10.93, beating second-placed Ivorian Murielle Ahoure.

The Briton said she was confident going into August’s European Championships.

“You need quick times to win,” she told the BBC. “I have to ensure I’m in the best physical and mental shape.”

Elsewhere, compatriot Lorraine Ugen won the women’s long jump with 6.85m, and Cuba’s Juan Miguel Echevarria produced a winning jump of 8.83m in the men’s competition. It was the best effort for 23 years, however he was aided by an illegal wind of 2.1m per second.

Beth Dobbin also improved her own Scottish record as she finished second in the women’s 200m, clocking 22.83 seconds, shaving one-hundredth of a second off the new mark she set on 3 June.

Another Briton, Morgan Lake, cleared 1.90m to finish eighth in the women’s high jump, which was won by Russian Mariya Lasitskene (2.00m).