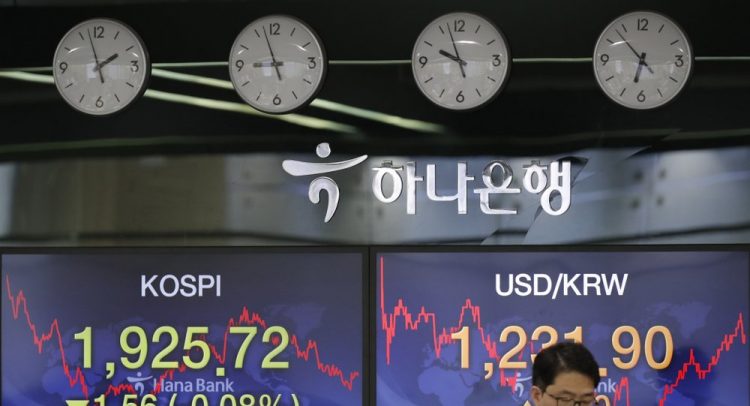 Stocks moved solidly higher on Wall Street in morning trading Monday, extending a global rally amid optimism about a potential vaccine for the coronavirus and hopes for a U.S. economic recovery in the second half of the year.

The S&P 500 was up 3.2%, on track for its best day since early April. The gains erased all of its losses from last week, when the index posted its worst decline in two months. Bond yields rose broadly in another sign of positive sentiment among investors.

Stocks were already headed for a higher opening on Wall Street when a drug company announced encouraging results in very early testing of an experimental coronavirus vaccine. The stock of the company, Massachusetts-based Moderna, jumped 23.4% in morning trading.

Investors were also encouraged by remarks over the weekend from Federal Reserve Chair Jerome Powell, who expressed optimism that the U.S. economy could begin to recover in the second half of the year. Once the outbreak has been contained, he said, the economy should be able to rebound “substantially.”

Technology and financial stocks accounted for a big slice of the broad gains, along with health care and industrial companies. Energy stocks rose as the price of U.S. crude oil headed sharply higher, crossing above $30 a barrel for the first time in two months as oil production cuts kick in at the same time that demand is rising as the U.S. and other countries ease some of the restrictions aimed at stemming the spread of the outbreak.

Bonds yields rose. The yield on the 10-year Treasury note, a benchmark for interest rates on many consumer loans, rose to 0.71% from 0.60% late Friday.

Fears of a crushing recession due to the coronavirus sent the S&P 500 into a skid of more than 30% from its high in February. Hopes for a relatively quick rebound and unprecedented moves by the Federal Reserve and Congress to stem the economic pain fueled a historic rebound for stocks in April.

May got off to a downbeat start as investors balance cautious optimism of a recovery as economies around the world slowly open up again against worries that the moves could lead to another surge in coronavirus infections and more economic uncertainty. But Monday’s strong start to the week reversed all of the market’s losses so far this month.

Wall Street is hoping that the reopening of businesses and the relaxation of stay-at-home mandates continue without any major setbacks, paving the way for corporate profits to bounce back.

Europe has been taking steps to reopen its economy more widely, and so far, new infections and deaths have slowed considerably across the continent. Some countries there started easing lockdowns a month ago and even the harshest shutdowns — such as those in Italy and Spain — have loosened significantly.

In his interview with CBS’s “60 Minutes,” Powell said the U.S. economy was fundamentally healthy before the virus forced widespread business shutdowns and tens of millions of layoffs. He noted that a full recovery won’t likely be possible before the arrival of a vaccine.

Before trading opened, Moderna said its experimental vaccine showed encouraging results in early testing, triggering hoped-for immune responses in eight healthy, middle-aged volunteers. The vaccine generated antibodies similar to those seen in people who have recovered from COVID-19 in study volunteers who were given either a low or medium dose.