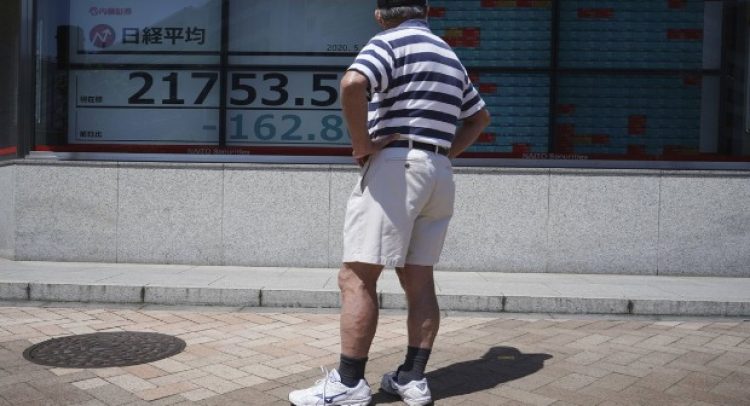 U.S. stock indexes headed lower in early trading Friday as investors worry that the U.S. and China could be headed for another confrontation, this time over the autonomy of the former British colony of Hong Kong.

The S&P 500 was down 0.4%, adding to losses from a late-afternoon sell-off a day earlier. Even so, the benchmark index is on track to close out May with its second monthly gain in a row. Stocks have now recouped most of their losses after the initial economic fallout from the coronavirus pandemic knocked the market into a breathtaking skid in February and March.

The Dow Jones Industrial Average was down 132 points, or 0.5%, to 25,266. The Nasdaq composite, which is heavily weighted with technology stocks, fell less than the rest of the market, just 0.1%. Stock indexes in Europe were broadly lower following a mixed finish in Asian markets.

U.S. Secretary of State Mike Pompeo has said the law means Washington may no longer treat the former British colony, already reeling from anti-government protests and the pandemic, as autonomous from Beijing. That could undermine the city’s status as a major center for trade and finance. Hong Kong’s Hang Seng index finished 0.7% lower Friday.

Washington and Beijing have been trading harsh rhetoric recently on everything from Hong Kong to the response to the coronavirus outbreak. Investors are worried that it could lead to another punishing round of escalating tariffs between the two countries, which would only further damage a global economy punished by a severe recession due to the pandemic.

The market plunged 34% from late February through late March but has rebounded quickly since then after the Federal Reserve and Congress pledged unprecedented amounts of aid for the economy. Recently, investors have favored stocks that would benefit the most from a reopening economy.

Governments around the country and around the world are slowly lifting restrictions meant to corral the outbreak. That has many investors hoping the worst of the recession has already passed, or will soon. However, concerns remain that the relaxing of stay-at-home mandates and the reopening of businesses could lead to another surge in infections, potentially extending how long it will take for the economy to recover.

The yield on the 10-year Treasury, a benchmark for interest rates on many consumer loans including mortgages, fell to 0.66% from 0.70% late Thursday. Lower yields mean investors are cautious about the prospects for economic growth and healthy amounts of inflation.

Photo: A man looks at an electronic stock board showing Japan’s Nikkei 225 index at a securities firm in Tokyo Friday, May 29, 2020. Shares fell Friday in Asia after Wall Street’s rally petered out amid worries about flaring U.S.-China tensions.(AP Photo/Eugene Hoshiko)

China slams 'senseless' US move at UN over Hong Kong