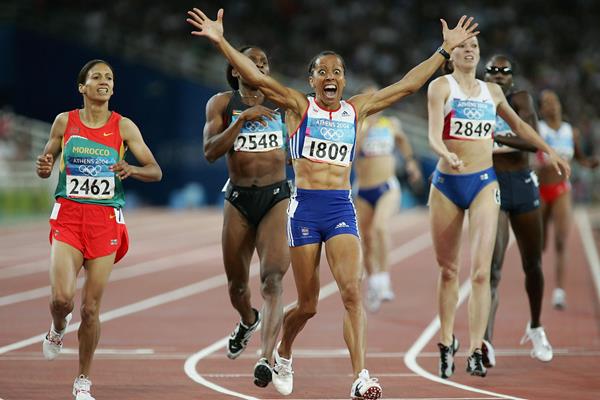 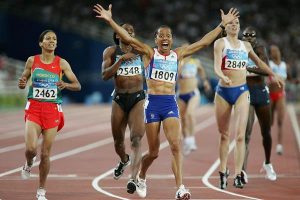 “That year (2004) I covered a lot of athletics on the circuit and I was aware that Kelly Holmes had enjoyed a very good season.

“Sometimes when watching sport, you get a little inkling when something might happen and I was quite confident she would win. From my knowledge that season, I actually thought it would be quite a close race, so I went a bit looser with the shot thinking it could be a blanket finish from lanes two to four. Many of the other photographers that night in the Olympic Stadium had the same image but they’ve gone in much tighter for the photograph.

“A colleague of mine was actually working on the in-field with a remote camera pointing on the finish line, standing to trigger off the remote. I’m not sure if Kelly knew she had won as she crossed the line but my colleague, who was standing only a few feet away, shouted to Kelly, ‘you’ve won, you’ve won’.

“There was that little delay as she crossed the finish line before her eyes turned to the size of pans. I didn’t quite realise the shot at the time, it was only later after one of my colleagues was uploading the picture and I saw her expression and the arms out I knew I had something half-decent.

“As I’m British myself, for Kelly to win gold was a special moment. It was the image to capture because although she went on to take gold in the 1500m, she cruised to success in that event.

“For me, it was just one of those images when all the stars aligned. I wasn’t around at the 1980 Moscow Olympics but I guess it was my image to compare with that famous shot of Seb Coe crossing the finish line with his arms outstretched when winning gold in the 1500m.

“The Kelly Holmes image works so well because of the eyes. Although, as an interesting postscript, had that image been taken today, I doubt we would have seen it in this form. Back then, we would have cropped the image and put out a couple of frames, but today we would have sent every frame of the sequence. The internet uses pictures in panoramic shape and – because of mobile phone usage – the image, I’m fairly certain, would probably have only been used from the waist upwards.”