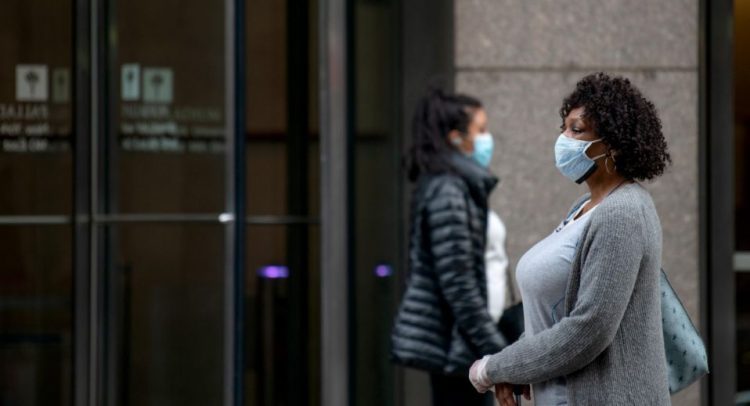 Study shows loud talking can generate over 1,000 respiratory droplets — but experts say 6 feet is still sufficient to protect against the coronavirus

COVID-19 has earned a reputation for being a highly infectious virus, and a new study only emphasizes that.

The study, which was published Tuesday in the Proceedings of the National Academy of Sciences, recruited volunteers and asked them to repeat the phrase “stay healthy” several times into the open end of a cardboard box. While they were doing this, the researchers used laser light technology to track the respiratory droplets that were generated while the study participants spoke.

When they analyzed the data, the researchers found that about 2,600 droplets a second were created when people talked. And the louder people spoke, the larger the droplets and the more of them were produced.

The researchers didn’t specifically test people who had COVID-19, but they combined their findings with previous research on the respiratory droplets produced by people who were hospitalized with the virus. By combining all that data, the researchers estimated that a person infected with COVID-19 could produce at least 1,000 respiratory droplets that contained the virus.

Even scarier: Based on their calculations, the scientists found that the droplets can hover in the air anywhere from eight to 14 minutes after they’re released.

While the findings sound frightening, it doesn’t change much about what scientists already know about COVID-19, infectious disease expert Dr. Amesh A. Adalja, senior scholar at the Johns Hopkins Center for Health Security, tells Yahoo Life. “It’s important to remember that the study itself wasn’t showing coronavirus transmission,” he says. “What we know is that coronavirus is spread through droplets that fall to the ground, usually within 6 feet of the infected person.”

“We have known for some time that talking and laughing produces droplets. To talk and laugh, we need to exhale air from our lungs out through our mouths. The same process occurs when we cough and sneeze,” Dr. Jonathan Parsons, a pulmonologist at the Ohio State University Wexner Medical Center, tells Yahoo Life. “Most people know that coughing and sneezing generates droplets, but fewer may be aware that talking does as well.”

Adalja says it’s “a leap” to assume these findings mean that everyone with COVID-19 is releasing that many infected droplets into the air that will hover for up to 14 minutes. “The epidemiology of spread doesn’t support that people are getting the virus through these infected droplets hovering in the air,” he says. Instead, Adalja says, research and epidemiological data so far have found that people are more likely to contract the virus if they have close personal contact with an infected person.

Dr. Kavita Patel, a nonresident fellow at the Brookings Institution and Yahoo Life Medical Contributor, agrees. “It’s not like if someone with COVID-19 is talking with force that I’ll be infected if I’m walking through that area 10 minutes later,” she tells Yahoo Life. “It’s most likely happening from close contact.”

Still, Patel points to recent research conducted by the Centers for Disease Control and Prevention — along with this new report — as evidence that people should be wary of coming into close contact with others outside their own household. That particular study found that 87 percent of people in a choir group in Washington state developed COVID-19 from one infected member in the group. “That article, plus this article, illustrates to me that people should be wearing nonmedical masks, particularly in closed spaces,” Patel says.

The latest findings are “consistent with what we know so far,” Dr. Stanley Weiss, a professor in the department of medicine at Rutgers New Jersey Medical School, tells Yahoo Life. “But the validation is an important step,” he continues. “We still know relatively little about this virus.”

Weiss points out that it’s currently unclear how many respiratory droplets it takes to infect another person. “We often think that a single particle might be destroyed in some way or our immune system may be able to overcome it,” he says. “With COVID-19, we don’t know how many are needed to transmit infection.”

So what does all of this mean? If you start to meet up with friends again as local regulations allow, Patel recommends being cautious about how you approach it. “Stay 6 feet apart, meet them outside and wear a mask,” she says. “We should not be sitting in a closed, cramped coffee house together.”

Even though wearing a mask is recommended, Patel points out that masks are not perfect. “Wearing a mask itself doesn’t guarantee you won’t get the virus,” she says. “It only filters out about 60 percent of the virus, which is why we add that to social distancing.”

Overall, the latest findings only reinforce what we already know, Dr. Laila Woc-Colburn, an associate professor and medical director of infectious diseases at Baylor College of Medicine, tells Yahoo Life. “It’s nothing new and nothing to panic about,” she says.

Photo: Based on calculations, scientists found that the droplets can hover in the air anywhere from eight to 14 minutes after they’re released. (Alexi Rosenfeld/Getty Images)