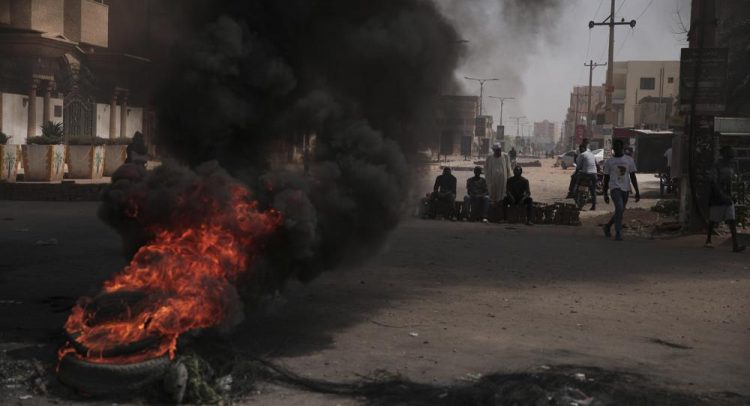 The arrests came as protests denouncing Monday’s takeover continued in the capital of Khartoum and elsewhere, and many businesses shut in response to calls for strikes. The coup threatens to halt Sudan’s fitful transition to democracy, which began after the 2019 ouster of long-time ruler Omar al-Bashir in a popular uprising.

Groups of protesters — in some places, dozens, in others, hundreds — set up barricades of stones on main roads throughout the day. Security forces waded in, chasing demonstrators and dismantling the barriers.

“It looks like a hit and run process, they remove, and we build,” said activist Nazim Sirag.

Activists said some protesters were shot and wounded, though they did not have exact figures. Security forces confronting protesters have killed at least six people since Monday and wounded over 140 others, many in critical condition, according to physicians with the Sudan Doctors’ Committee.

“We are frustrated,” she said, “but we have no other option but the street.”

The coup came after weeks of mounting tensions between military and civilian leaders over the course and pace of Sudan’s moves toward democracy.

The African Union suspended Sudan — an expected move typically taken in the wake of coups. The AU Peace and Security Council said in a tweet Wednesday that the suspension would remain in place “until the effective restoration of the civilian-led Transitional Authority,” as the deposed government was known.

The AU plans to send a mission to Sudan to hold talks with rival parties.

German Foreign Minister Heiko Maas, meanwhile, called the military’s takeover a “catastrophic development,” warning that it would have “severe consequences” for Sudan’s recent efforts to reintegrate into the international community after nearly three decades of isolation under al-Bashir.

“It is putting the country in a perilous situation and is calling the Sudan’s democratic and peaceful future … into question,” he said in a statement Tuesday.

Following widespread international condemnation, the military allowed deposed Prime Minister Abdalla Hamdok and his wife to return home on Tuesday night. Hamdok, a former U.N. economist, was detained along with other government officials when the military seized power.

Several Western embassies in Khartoum said Wednesday they will continue to recognize Hamdok and his Cabinet as “the constitutional leaders of the transitional government” of Sudan.

In a joint statement, the embassies of the European Union, the U.S., the U.K., France and several other European countries called for the release of other detained officials and for talks between the military and the pro-democracy movement.

The general leading the coup, Abdel-Fattah Burhan, has pledged to hold elections, as planned, in July 2023, and to appoint a technocrat government in the meantime.

But critics doubt the military is serious about eventually ceding control, noting that the coup came just weeks before Burhan was supposed to hand over the leadership of the top ruling body, the Sovereign Council, to a civilian. The council, which was made up of both civilian and military leaders but led by a general, was the ultimate authority in the country, while Hamdok’s transitional government ran day-to-day affairs. Both were dissolved in the coup.

The activists taken overnight were Ismail al-Taj, a leader of the Sudanese Professionals’ Association, the group at the forefront of the protests that brought down al-Bashir; Sediq al-Sadiq al-Mahdi, a leader in Sudan’s largest political party, known as Umma and brother of Foreign Minister Mariam al-Mahdi; and Khalid al-Silaik, a former media adviser to the prime minister.

The three have been outspoken critics of the military takeover — and have called for protests against the move. Already, tens of thousands of Sudanese have taken to the streets, and activists are planning a mass demonstration on Saturday.

Al-Silaik was detained moments after he gave an interview to broadcaster Al-Jazeera, according to his wife, Marwa Kamel. In the interview, he criticized the military’s takeover, calling Hamdok and his government the legitimate administration of Sudan.

“What Gen. Burhan did is a complete coup. … People will respond to this in the coming days,” al-Silaik said.

Activists Nazim Siraj and Nazik Awad and the Umma party confirmed the arrests of the other two figures.

When Burhan dissolved the Sovereign Council and the transitional government on Monday, he alleged that the military was forced to step in to prevent the country from sliding into civil war. But he had repeatedly warned he wanted to delay the transition to civilian leadership of the council.

Meanwhile, flights in and out of Khartoum’s international airport were scheduled to resume Wednesday, a day after the country’s Civil Aviation Authority said they would be suspended until Oct. 30.

People burn tires during a protest a day after the military seized power Khartoum, Sudan, Tuesday, Oct. 26, 2021. The takeover came after weeks of mounting tensions between military and civilian leaders over the course and the pace of Sudan’s transition to democracy. (AP Photo/Marwan Ali)