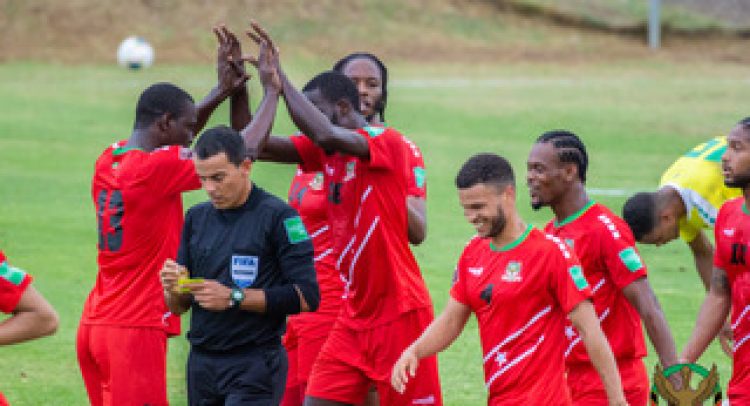 Sugar Boys progress to next round of World Cup Qualifying

St. Kitts and Nevis have progressed to the next round of World Cup qualifying after picking up a 3-0 victory at home against Guyana on Friday at the Warner Park. The confirmation of the progression to the next round was made on Saturday when Trinidad and Tobago, also in the same group as St. Kitts and Nevis, drew with the Bahamas 0-0, as they would have needed a win in that match to stand a chance. Keithroy Freeman got the goalscoring off in the 9th minute for the Sugar Boyz, after Harry Panayiotou was fouled in the penalty area. Freeman dispatched the penalty coolly in the back of the net. He then doubled the lead in the 36th minute when he flicked one beyond the Guyanese goalkeeper when a shot from outside the box came his way. Romaine Sawyers made sure the victory was certain with a third goal in the 67th minute. The match was broadcast live on the SKNFA Facebook page and website.

After the match, St. Kitts and Nevis coach Leo Neiva expressed pleasure with the result and the performance of his team. “It was a great victory. I am very pleased with the players commitment…of course we need to fix some points to improve and we are totally focused on the next game against Trinidad and Tobago to surprise them,” Coach Neiva said.

Coach of Guyana Marcio Maximo in a virtual press conference on Saturday said St. Kitts and Nevis deserved the win but it was a very balanced game. “We take it game by game to improve the team. (On Friday) we take some lessons; sometimes we concede some easy goals which does not reflect the game,” he said. We conceded easy goals in crucial times but with experience game by game, we would reduce the mistakes.”

St. Kitts and Nevis will next do battle with Trinidad and Tobago, who have now been knocked out of World Cup qualifying for Qatar 2022, due to their draw to the Bahamas; a team St. Kitts and Nevis defeated 4-0 earlier this year. That means, St. Kitts and Nevis with nine points tops the table and will progress to the next round to face either El Salvador or Antigua and Barbuda on June 12. Only one team will progress from the group, which comprised Guyana, Trinidad and Tobago, Puerto Rico and Bahamas. Notable as well for the Sugar Boys is the fact that they are yet to concede a goal in this round, scoring eight goals in the process. The game against Trinidad will be held on neutral grounds in the Dominican Republic. The team, officials and backroom staff have already left the Federation. Guyana will remain in St. Kitts to play their match against Puerto Rico which will be held at the Warner Park on Tuesday afternoon. The match on Friday was held on strict COVID-19 rules and was monitored by compliance officers from the COVID-19 task force.

Featured Photo – SKN Senior Men’s National Team players celebrate with Keithroy Freeman after he scored the opening goal against Guyana in their World Cup Qualifier on Friday June 4 at the Warner Park in Basseterre.