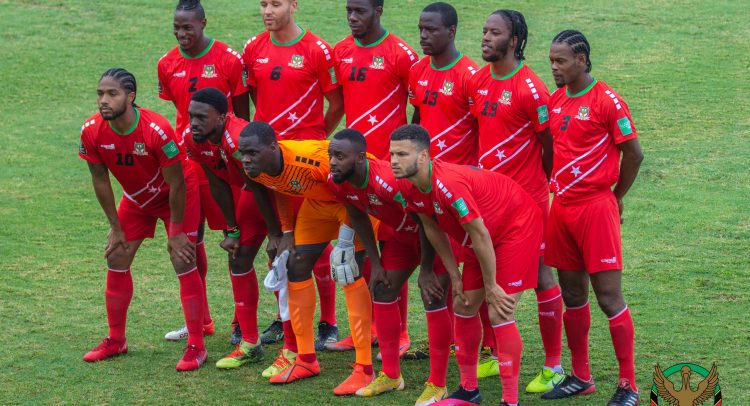 The St. Kitts Nevis National Senior Men’s Team is gearing up for their match against El Salvador in the next round of CONCACAF World Cup qualifying this Saturday at 4pm. The Sugar Boys ended the previous round in fine style, winning three of their four matches and conceding only two goals. Though losing their latest match to Trinidad and Tobago, the team did enough to be one of the first teams to qualify for the next round, scoring eight goals in all matches in the process. Coach Leo Neiva admitted that the loss to Trinidad was due in part to changes he made to the team, replacing some of the first team players to avoid any possible suspensions for the El Salvador match.

Players like Keithroy Freeman, goalkeeper Julani Archibald and Thrizen Leader were replaced because they got yellow cards in their match against Guyana last week. If they picked up yellow cards in the Trinidad match, they would have automatically been suspended for the next game against El Salvador. Instead, Coach Neiva used younger, promising players in their stead, which gave them valuable experience. “Trinidad and Tobago played better than us. They imposed themselves physically and technically. They deserved the win. Also it was a good exercise for them because it’s the first time the opponent scored against us. We can use two, three different tactical formations to test and also we gave the opportunity for every single player (in the team). This game was an excellent training for us,” he said.

He is anticipating the match up against El Salvador and he is confident they will progress to the next round. “We hope for a beautiful and good game because El Salvador has a different style of football. Completely different from Trinidad and Tobago and Guyana,” Coach Neiva said. “They play beautiful football, quick football, keeping the ball on the ground like South American football…we have changed our style a little. We are coming to play even more beautiful. We hope to win; we believe (we can win) and hopefully we will have very good news for the country,” he added.

St. Kitts and Nevis will play El Salvador in a home and away series: the home match being Saturday at 4pm at the Warner Park. The return leg will be played on Tuesday June 15. With favorable results, St. Kitts and Nevis would progress to the final round of FIFA world Cup qualifying—the Octagon stage which already has five teams awaiting the three winners of this round. Those five teams are Costa Rica, USA, Jamaica, Mexico and Honduras.

Agricultural Trade: A key engine to drive the economies of Latin America impacted by the pandemic