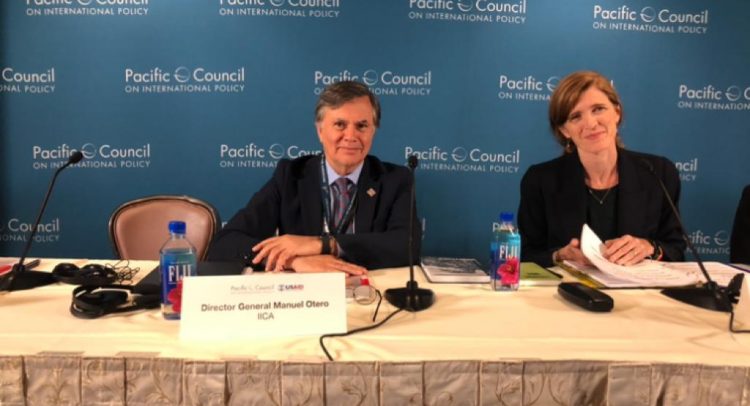 Summit of the Americas: U.S. announces multi-million dollar aid package for Central America, while IICA calls for a “hemispheric partnership” to tackle the food crisis

Los Angeles, United States, 9 June 2022 (IICA) – Addressing a forum of the Summit of the Americas,  Director General of the Inter-American Institute for Cooperation on Agriculture (IICA), Manuel Otero, called for the creation of a hemispheric partnership to tackle growing food insecurity, even as the United States announced millions of dollars in humanitarian aid for Central American countries.

Samantha Power, Administrator of the United States Agency for International Development (USAID) and former U.S. Ambassador to the UN, made the announcement at the “Global Food Crisis and the Americas” forum, which was convened by the non-governmental organization, Pacific Council on International Policy. Other participants in the forum were Enrique Eduardo Reina, the Honduran Minister of Foreign Affairs; Gael Pressoir, renowned scientist from  Quisqueya University in Haiti; and Renata Segura, from the International Crisis Group.

The panelists discussed actions and proposals that must be implemented in the Americas, by governments, the private sector, civil society and academia, in the face of mounting crises posed by the war in Eastern Europe, the COVID-19 pandemic and climate change. The situation is triggering increases in the prices of food and energy, as well as disruptions in the trade of fertilizers, putting the people of the most vulnerable countries in Latin America and the Caribbean in a precarious position.

Samantha Power remarked that, “I cannot imagine any more important issue in the world today. We are witnessing the highest food prices seen in a generation and the crisis is grave. Societies are appealing to leaders in the public and private sectors to work together to confront the problem”.

She also pointed out that, “Even before the war in Europe, the number of people suffering from hunger and malnutrition was on the rise – a clear indication that we were moving in the wrong direction”.

The high-level authority announced that an additional USD 331 million of food and humanitarian assistance would be given to countries in Latin America and the Caribbean, specifically in what is known as the Northern Triangle of Central America—El Salvador, Guatemala and Honduras—”where millions are facing food insecurity”.

Moreover, assistance has also been earmarked for Haiti, where 40% of the population is in need of food assistance, and for Colombia, where food inflation between 2021 and 2022 was in the double digits.

Powers advised that further announcements will be made in the coming days regarding food assistance to Venezuela, not only for vulnerable persons living in that South American country, but also for Venezuelan migrants and refugees in other countries in the region.

“The Russian invasion removed 27 million tons of wheat, corn and barley from the global food market. This year alone, this war will cause as many as 40 million people worldwide to be pushed into poverty and hunger”, warned Power.

“We know that food aid will not resolve the crisis,” she said, “because it calls for long-term solutions, investing in farmers so that they can produce more. On the other hand, this crisis also represents an opportunity for the Americas, which already produces one third of the food in the world and has the capacity to produce even more”.

Power also confirmed that the government of President Joseph Biden is working to sever the countries of the Americas’ dependence on Russia for fertilizer supplies, and to increase their output, using science and innovation, despite climate change.

On the other hand, Manuel Otero insisted on the need to forge a hemispheric partnership to tackle food insecurity, “which would enable the Americas to increase its global visibility and assume its responsibility as a guarantor of global food security and environmental sustainability. This would also result in more employment, more income and an improved quality of life. We need more institutions and more investment”.

Otero explained that Latin America and the Caribbean was the region that had been most affected by the pandemic, economically and socially. This had been further complicated by increasingly frequent extreme climate events, coupled with the war in Eastern Europe, which had led to increased prices for food, energy and fertilizers.

The IICA Director General explained that the region of the Americas is heterogeneous, comprising large food producing countries, such as Brazil, Argentina, the United States and Canada, as well as food importing countries that are also grappling with the consequences of climate change, for example, in the Northern Triangle of Central America, the Eastern Caribbean and Haiti.

He stressed that, “It is vital that we sever the connection between the war and the production, exportation and supply of food. The right to food is sacred. We must ensure access to financing for our 16.5 million farmers, particularly small farmers”.

Finally, Otero mentioned the need to increase intraregional trade and investment in research and science, as a means of boosting productivity.

Honduras’ Minister of Foreign Affairs advised that his government “was heartened by the United States government’s announcement regarding food and humanitarian aid to Honduras. It sends a positive message of support for all the Americas and strengthens the relationship with the region. What is important now is to see how we can work together to ensure that this assistance translates into benefits for our poorest and most needy sectors”.

Reino stated that Honduras is one of the countries most vulnerable to climate change, explaining that the most recent hurricanes had battered the country, producing millions of dollars in losses in its most productive regions.

“We are aware of this reality”, the Minister said, “and we know that the State has to work on this. But we also believe that cooperation projects by IICA and the USAID are very valuable in building resistance”.

Finally, he warned that, “We need action, investment and communication. If we fail to act and invest, the situation will not change. And if we don’t communicate to jointly identify cooperation mechanisms, it will be very difficult to transform this reality”.

Renata Segura spoke about how the food crisis is affecting migration from the Northern Triangle countries of Central America. The International Crisis Group is an independent organization working to prevent conflicts.

Haitian scientist, Gael Pressoir, described the situation in Haiti in the face of increases in food prices internationally. Pressoir is Dean of the Faculty of Agricultural and Environmental Sciences (FSAE) of Quisqueya University and senior scientist of the Chibas Foundation in Port-au-Prince, Haiti. The latter is an organization focusing on sustainable agriculture.