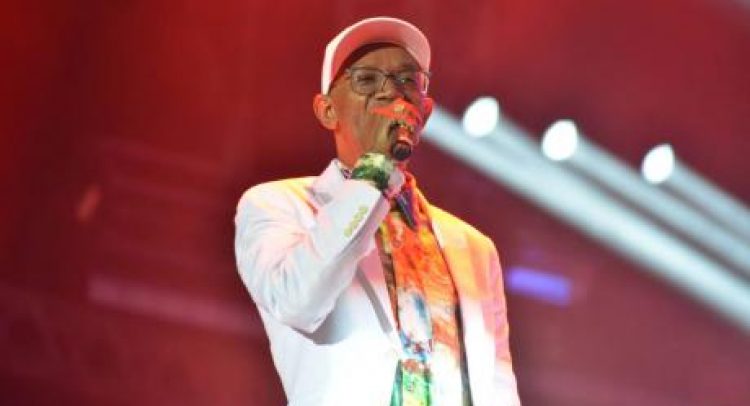 (Jamaica Gleaner) – ‘Superstar’, a term that publicists attach to entertainers with three songs, is used so loosely nowadays that it seemed to be on the verge of losing its meaning. But on Sunday evening, the last day of Reggae Month, acclaimed reggae singer and lover’s rock maestro Beres Hammond put things in perspective and gave a master class in what exactly it means to be a superstar.

Beres, the quintessential superstar, effortlessly came, saw and conquered, at an intimate, virtual concert named after one of his many hits, Love From a Distance. And, the over 100,000 viewers on the VP Records YouTube channel, one of several platforms showing the concert, ensured that Beres trended on Sunday.

With cameos from his equally legendary friends, Buju Banton and Marcia Griffiths, along with the deejay whose trajectory is pointed straight at superstardom, Popcaan, the Grammy-nominated artiste took his global audience through his decades-deep catalogue of hits, each song sounding fresh, yet familiar. Expertly backed by the mini-orchestra that was the Harmony House band, along with his three back-up singers, who are compared to the legendary I-Three, Beres had one fan declaring, “It nuh get nuh better than this”, while another exclaimed, “What a way to end February 2021!”

Love From a Distance was billed as “a moment in time with a man and his music”, and the man admitted that he was saddened that he hasn’t seen his fans for almost two years. “It makes me feel bad … but just relax, and welcome to Beres”, he said pre-show. What followed was a hit-you-where-you-feel-it-most selection of reggae, dancehall, rub-a-dub and lover’s rock tunes.

Beres’ well-tuned vocals, the topic of much conversation in the chat, along with his “big chune after big chune” performance, made him a certified GOAT, perhaps for the umpteenth time. “GOAT. Real music that will never die. Beres Hammond, the godfather, the legend, the icon, the superstar. He’s just the greatest ya man. Nuff love,” a fan wrote in the chat.

In the absence of a real stage and real lighters, the live chat became that space where fire emojis aplenty dropped rapidly and blazed the place. And so too did the hearts, dancing girls and clap hands emojis, and, believe it or not, even a few bombs, all in gratitude for a most refreshing experience that was compared to “coconut wata a wash off yu heart [and] a cold Red Stripe on a hot day”. It was a night on which Beres was given his flowers, deservedly so.

His long-time friend and collaborator Buju Banton did not hesitate to pay respect, even surprising Beres by singing a song Beres himself had recorded some 30 years ago. “Yuh know yuh a mi fan,” Beres said, in a voice tinged with humour, and to which Buju responded, in all seriousness, “Big time.”

Buju added, “The work that you’ve put in in this industry, it’s only because my people refuse to see it why they don’t see it, but the world see it. We appreciate you, yuh kno.”

Then it was straight into the ‘90s dancehall era that “bad like yaws” with Pull Up the Vibes, continuing their on-stage camaraderie that is guaranteed to light up any concert “just like Disney World”, to borrow a line from their hit collab, Falling in Love All Over Again. Beres had earlier introduced Buju, or “Markie” as he shouted him out, as “one of my favourite people”, and clearly, the feeling is mutual. Buju even managed to get Beres to deejay while he took over the singing duties, a role reversal which proved classic and scored full marks in the chat.

Another of Beres’ good friends, Marcia Griffiths, also took centre stage, and of course, the music spoke volumes, but so too did the former I-Three member’s appearance, which was another discussed topic in the chat. “Look pon Marcia, when gal good dem good,” was the compliment, in praise of her youthful appearance. Their performance of the love song, Live On, was simply epic. As Beres said, “What a beautiful moment.”

Then came Popcaan. Surprise quickly gave way to full-blown excitement. The ‘Unruly Boss’ saluted Beres with words of honour, and together they performed God is Love, a surprising collab with the legend and Popcaan, who the chat baptised “a legend in the making”. And that was the defining moment when the bomb dropped in the chat.

A production of VP Records, Beres’ Harmony House and the Ministry of Culture, Gender, Entertainment and Sport, it was a yeoman effort that went into making this first-class, international production, backed by the strength of Phase Three Production and an A-class team. Visually appealing, with crisp and clean audio, one viewer stated, “this video will be a time capsule”. Fans eagerly lavished praise on the team for a great job and on Beres for songs such as Groovy Little Thing, Sweet Lies, Putting Up Resistance, Double Trouble, Full Attention, Tempted to Touch, Rockaway and Wonder What the People Say.

Among the comments were: “What a musical healing, give thanks big brother Beres Hammond soundtrack of our life.” “Thank you, VP records and Beres Hammond, for a phenomenal show! This was so refreshing.” “Best concert ever. Felt like I was there. The title ‘Love From a Distance’ could not have been better suited!! Everyone on that stage sang and played their heart out. Just a lovely team performance.”

“Timeless. It is an honour to be able to listen to Beres. He is the greatest to do it. Beres music stirs and moves the soul.”

“There is not one situation in a relationship that Beres has not spoken to. I could hold a complete conversation using Beres’ songs as my words.”

The prolific Beres Hammond signed off Love From a Distance, his first virtual concert, with his ode to gratitude, Say Thank You.

Publisher to appeal ruling that it invaded Meghan’s privacy