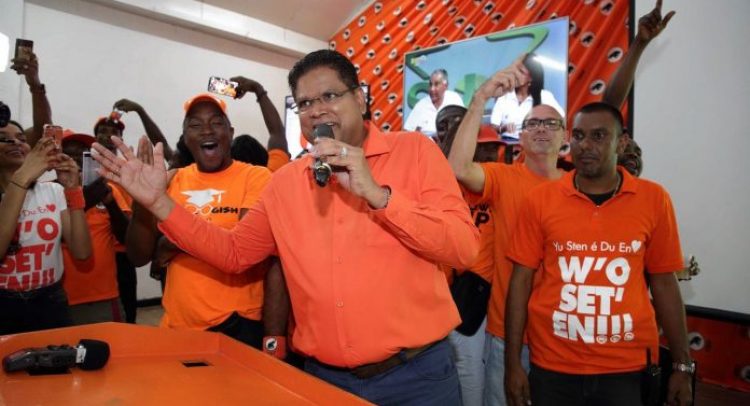 PARAMARIBO, Suriname –The leader of the Progressive Reform Party (VHP), Chandrikapersad Santokhi, Monday was elected the new President of Suriname, replacing former military strongman, Desi Bouterse, whose National Democratic Party (NDP) lost its majority in the Parliament in the May 25 general election.

The 61-year-old Saniokhi is a former justice minister in Suriname.

Former rebel leader, Ronnie Brunswijk , 59, the head of the General Liberation and Development Party (ABOP), was also elected Vice President during Monday’s first sitting of the Parliament since the polls.

The VHP and ABOP are part of the coalition that includes The National Party of Suriname (NPS) and the Pertjajah Luhur (PL). The coalition controls 33 of the 51 seats in the parliament.

The two men were elected without any opposition.

Monday’s extraordinary meeting was led by Brunswijk, who later transferred the transferred the hammer to Vice President of the National assembly, Dew Sharman. The election was supervised by Krishna Mathoera, who announced that the nomination process had been done correctly. Persons seeking nomination must under the law be nominated by at least seven Assembly members.

Brunswijk is a Surinamese ex-rebel leader, politician, and businessman. After having served in the early 1980s as the personal body guard of Bouterse, who overthrew the government in 1980 in a military coup, Brunswijk left and formed the Surinamese Liberation Army, better known as the Jungle Commando.

The co-founder and chairman of the Maroon women network, Fidelia Graand-Galon, says that her organization is verypleased with Brunswijk’s election.

“With a Maroon as a VP we don’t have to explain anything. If the person who is there shows commitment and knows the problems of the group, it is a plus. We look forward to good cooperation. We also strive for the same goals that Brunswijk pursues after,” she said.

The inauguration for the two new leaders of the Dutch-speaking Caribbean Community (CARICOM) country will be held on Thursday.

“Thursday should at least be ready for the inauguration of the president and vice president and the swearing in of ministers,” said NPS chairman Gregory Russia, adding he does not expect any further problems with regard to the formation of the new cabinet