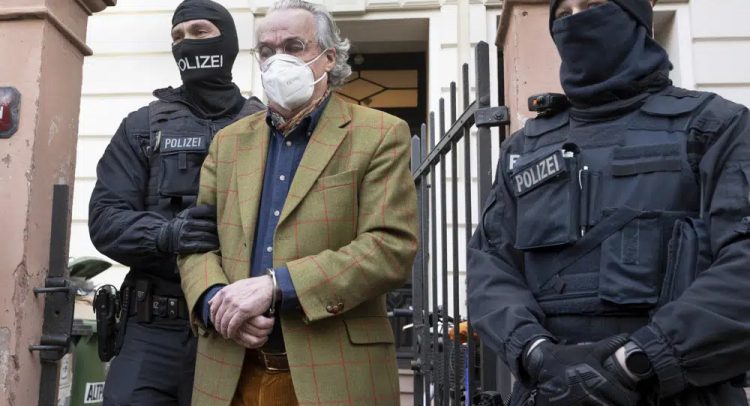 BERLIN (AP) — German police seized dozens of people including a self-styled prince, a retired paratrooper and a former judge on Wednesday, accusing the suspects of discussing the violent overthrow of the government but leaving unclear how concrete the plans were.

A German official and a lawmaker said that investigators may have detected real plotting, drunken fantasizing, or both. Regardless, Germany takes any right-wing threat seriously and thousands of police officers carried out pre-dawn raids across much of the country.

“We’re talking about a group that, according to what we know so far, planned to violently abolish our democratic state of law and an armed attack,” on the German parliament building, government spokesman Steffen Hebestreit said.

Sara Nanni, a lawmaker with the Green party, part of the German government, suggested the group may not have been capable.

“More details keep coming to light that raise doubts about whether these people were even clever enough to plan and carry out such a coup,” Nanni said in a post on the social network Mastodon. “The fact is: no matter how crude their ideas are and how hopeless their plans, even the attempt is dangerous!”

Federal prosecutors said the group is alleged to have believed in a “conglomerate of conspiracy theories consisting of narratives from the so-called Reich Citizens as well as QAnon ideology. ” Adherents of the Reich Citizens movement reject Germany’s postwar constitution and have called for bringing down the government, while QAnon is a global conspiracy theory with roots in the United States.

The Reich Citizens scene has been under observation by Germany’s domestic intelligence agency since 2016. Authorities estimate that the loose-knit movement has about 21,000 adherents.

One of the alleged ringleaders arrested Wednesday is Heinrich XIII Prince Reuss, a 71-year-old member of the House of Reuss who continues to use the title despite Germany abolishing any formal role for royalty more than a century ago.

Federal prosecutors said Reuss, whom the group planned to install as Germany’s new leader, had contacted Russian officials with the aim of imposing a new order in the country once the German government was overthrown. There is no indication that the Russians responded positively.

Alternative for Germany, which is known by its acronym AfD, has increasingly come under scrutiny by security services due to its ties with extremists.

AfD’s co-leaders, Tino Chrupalla and Alice Weidel said they had only learned of the alleged coup plans through the media, and condemned them.

“We have full confidence in the authorities involved and demand a swift and comprehensive investigation,” they said in a statement.

Chief federal prosecutor Peter Frank said some 3,000 officers were involved in the raids conducted at 150 sites in 11 of Germany’s 16 states.

One of those arrested was a soldier serving on the support staff for Germany’s special forces unit KSK in the southwestern town of Calw. The unit has received scrutiny over what officials called some soldiers’ far-right beliefs.

Along with detentions in Germany, prosecutors said one person was detained in the Austrian town of Kitzbuehel and another in Italy.

The latter suspect, a 64-year-old German citizen who is a former officer in the German army special forces, is accused of being part of a criminal organization that aimed to “subvert the German democratic order by any means – including criminal – and replace it with another unidentified form of state,” police said in a statement, adding that extradition proceedings were underway.

“Of course, there are many people who grandstand and tell confused tales stories after drinking alcohol,” German Justice Minister Marco Buschmann said. “In this case, however, there were such strong suspicions that the group wanted to take violent action that the investigating judge at the Federal Supreme Court ordered the investigative measures to be taken.”

Some of the group’s members had made “concrete preparations” to storm Germany’s federal parliament with a small armed group, according to prosecutors.

Wednesday’s raids showed that “we know how to defend ourselves with full force against the enemies of democracy,” Interior Minister Nancy Faeser said.

“The investigation offers an insight into the depths of the terrorist threat within the Reich Citizens milieu,” Faeser said. “Only the further investigation will provide a clear picture of how far the coup plans had come.”

Officials have repeatedly warned that far-right extremists pose the biggest threat to Germany’s domestic security. This threat was highlighted by the killing of a regional politician and the deadly attack on a synagogue in 2019. A year later, far-right extremists taking part in a protest against the country’s pandemic restrictions tried and failed to storm the Bundestag building in Berlin.

Faeser announced this year that the government planned to disarm about 1,500 suspected extremists and to tighten background checks for those wanting to acquire guns as part of a broader crackdown on the far right.

Masked police officers lead Heinrich XIII Prince Reuss, center, to a police vehicle during a raid against so-called ‘Reich citizens’ in Frankfurt, Germany, Wednesday, Dec. 7, 2022. Thousands of police carried out a series of raids across much of Germany on Wednesday against suspected far-right extremists who allegedly sought to overthrow the state by force. Federal prosecutors said some 3,000 officers conducted searches at 130 sites in 11 of Germany’s 16 states against adherents of the so-called Reich Citizens movement. (Boris Roessler/dpa via AP)