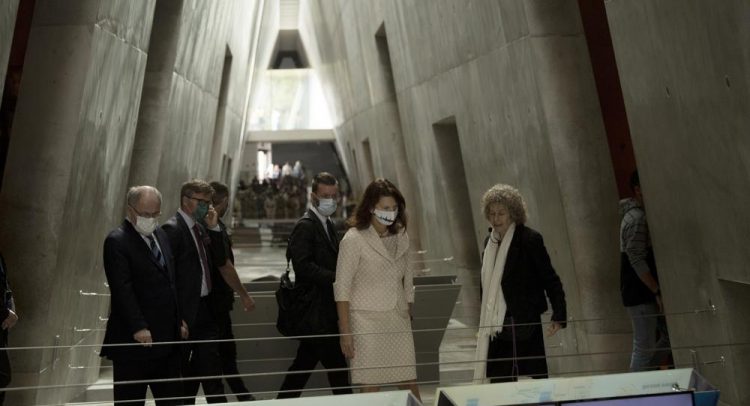 JERUSALEM (AP) — Sweden’s foreign minister visited Israel on Monday in an effort to mend ties after years in which the two countries have been at odds over the conflict with the Palestinians.

Sweden’s Social Democratic-led government recognized Palestinian statehood in 2014, making it the first large European country to do so since the end of the Cold War. Its former foreign minister’s comments in support of the Palestinians drew angry responses from Israeli officials.

Ann Linde tweeted that her visit — the first by a Swedish foreign minister in a decade — marks a “new beginning.”

Linde began her trip with a visit to the Yad Vashem Holocaust memorial in Jerusalem, where she placed a wreath in memory of the 6 million Jews who were killed by Nazi Germany and its collaborators.

“On behalf of Sweden I promise that we say – never again, and mean it. We will continue to take action to combat anti-Semitism in all its forms, to make sure that we never forget, “ she said.

Linde was also expected to meet with Palestinian officials in the occupied West Bank.

Israel’s new government coalition of parties from across its political spectrum, has looked to improve relations with other countries following the long rule of former Prime Minister Benjamin Netanyahu, whose nationalist policies strained ties with neighboring Jordan and some European countries, as well as with the Democratic party in the United States.

Israel’s current prime minister, Naftali Bennett, is opposed to a Palestinian state, and past leaders have said the international community should not recognize such a state until a final agreement is negotiated between the two sides. There have been no substantive peace talks in over a decade.