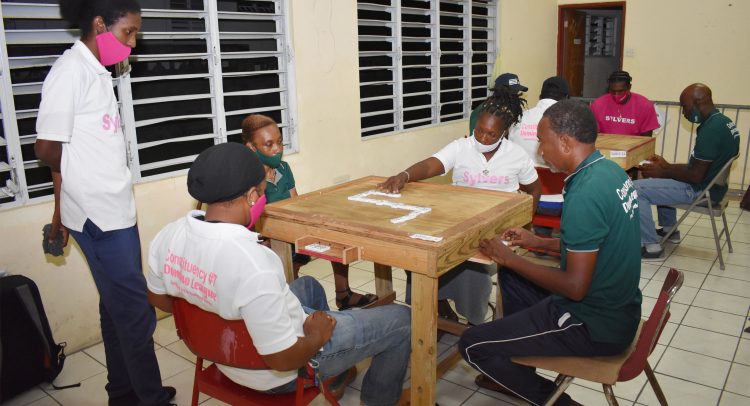 Sylvers Domino Club from Hidden Alley in Lodge Village, and the only team out of the fourteen in Constituency Number Seven Dr the Hon Timothy Harris Domino League that is captained by a female, Tuesday evening September 15 halted Molineux Domino Club’s short-lived winning form.

Molineux were in the 13th position out of 14 at the end of the first round of the 25th edition of the league and when the second round opened they lost the first three games. Then fortunes suddenly changed in the fourth segment when they humiliated former champions Unity Domino Club by handing them a 13-2 beating, and then went on to win the next two games.

Playing at the Edgar Gilbert Sporting Complex pavilion in Molineux on Tuesday, Sylvers were in their elements when they met Molineux as they won games with little opposition to the point of effortlessly leading 12-4.

At that point Sylvers needed only one game to win, but in that last game Captain Octavia ‘Tackie’ Huggins playing on table one along with Valencia Alexander raced to 100 points before Molineux could earn a single point which earned them a bonus game, and 14-4 win.

Third placed Tabernacle Domino Club were not as lucky as in their meeting with Saddlers Domino Club on the grounds of the Tabernacle Police Station they lost a point to their rivals in their 13-11 win. Former champions Lodge Domino Club scrapped through with a 13-12 win, also losing a point to Small Corner Bar Domino Club in their encounter at the Lodge Community Centre in Lodge Project.

Points standing positions remain relatively unchanged with the exception of defending champions Parsons who have moved from position nine to seven. Their movement up two positions meant that Unstoppable dropped from position seven to eight, and Mansion slid from position eight to nine.

Games continue on Thursday September 17 with the eighth segment of play in the second round of the 25th edition of Constituency Number Seven Dr the Hon Timothy Harris Domino League taking place at the usual three venues. All games start at 7:00 pm.

Three games, Giants vs. Saddlers, Unity vs. Guinness, and Lodge vs. Sylvers will be played at the Lodge Community Centre; two games, Phillips vs. Unstoppable and Small Corner Bar vs. Christchurch, will be played at the Edgar Gilbert Sporting Complex pavilion in Molineux; while the grounds of the Tabernacle Police Station will be the venue for Mansion vs. Parsons and Tabernacle vs. Molineux games.

King of Sweden, his Majesty Carl XVI Gustaf congratulates St. Kitts-Nevis on its 37 years of independence