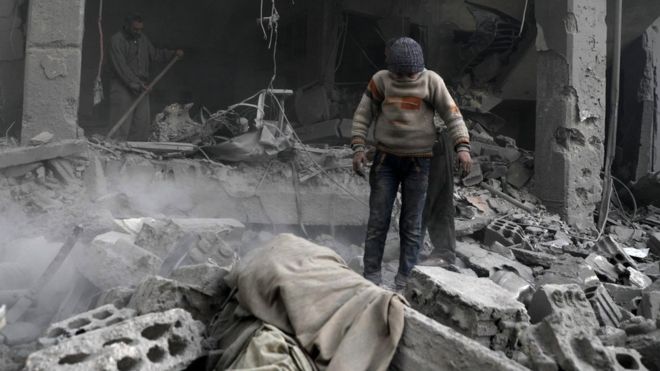 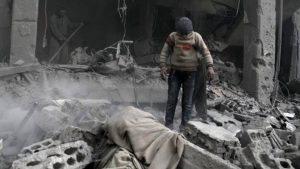 Rescuers said civilians had been hiding in the school to escape government and Russian raids on the town of Arbin.

More than 1,400 civilians are believed to have been killed since government forces stepped up an offensive on the enclave outside Damascus a month ago.

At least 50,000 civilians have fled the siege in the past week.

The exodus came after soldiers and allied militiamen drove rebel forces out of about 65% of the region, cutting it into three pockets.

The UK-based Syrian Observatory for Human Rights (SOHR) monitoring group reported that three missiles hit the underground school in Arbin, which is in the southern pocket controlled by the Faylaq al-Rahman rebel group.

In addition to killing 17 civilians, 50 others were wounded in the strike, SOHR said.

It showed rescue workers standing underneath a large hole in the ceiling, from which several destroyed pillars were dangling.

The coalition alleged that the school had been deliberately targeted by Russian aircraft, and that they were responsible for a “massacre”.

There was no immediate comment from the Russian military, but it has previously denied carrying out air strikes on civilians and civilian infrastructure.

The pro-opposition Orient News website reported that at least 20 civilians were killed in a similar attack on another basement shelter in the nearby town of Zamalka on Monday. It blamed “new Russian missiles, which can penetrate several floors to reach underground locations”.

Orient News and opposition activists also said the town of Douma – which is in the northern pocket controlled by the Jaysh al-Islam rebel group – had been attacked with incendiary munitions filled with white phosphorous.

UN High Commissioner for Human Rights Zeid Raad Al Hussein said on Monday that the government’s siege had “involved pervasive war crimes, the use of chemical weaponry, enforced starvation as a weapon of warfare, and the denial of essential and life-saving aid – culminating in the current relentless, month-long bombardment of hundreds of thousands of terrified, trapped civilians”.

“Families are now streaming out of the area, but many civilians fear reprisals will be taken against them for their perceived support for opposition groups,” he warned.

Seventy per cent of those who have so far fled on foot are women and children, according to Unicef. Many are in a very poor state of health, with children suffering malnutrition, scabies, diarrhoea and respiratory infections.

The UN refugee agency (UNHCR) said the makeshift collective shelters set up for the thousands of families fleeing was “extremely congested and overcrowded and lack basic sanitation”, and warned of serious health risks.

“These people left with nothing and they need essentially everything from clothes to shelter,” spokesman Andrej Mahecic told reporters in Geneva.

The agencies also expressed concern about the 104,000 people who have been uprooted from their homes by the battle between Turkish-backed rebel forces and a Kurdish militia for the north-western border region of Afrin.

A UN team that visited the nearby government-held town of Nubl on Monday found exhausted refugees who had trekked for hours through the mountains to escape. Local mosques and schools are now full of newly displaced people.

The conflict in Syria, which entered its eighth year last Thursday, has killed more than 350,000 people and displaced more than 11 million others.