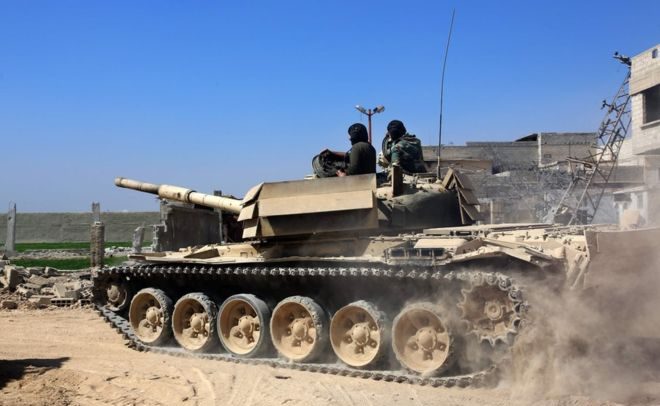 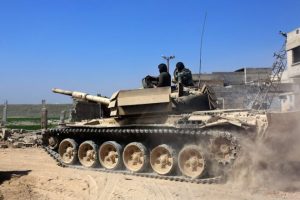 Forces loyal to the Syrian government have reportedly taken half of the Eastern Ghouta – the last rebel-held enclave close to the capital Damascus.

In New York, the UN Security Council gathered to discuss the failure of a ceasefire it had demanded last week.

It passed a resolution on 24 February demanding a 30-day truce across Syria but the government and its key ally Russia say it does not apply to some of the rebel groups holding the enclave.

A UN convoy was allowed to deliver aid to the enclave on Monday but left without unloading all of its trucks as shells fell.

More than 700 people have been killed in recent weeks in violence in the Eastern Ghouta, home to about 393,000 people. Many victims are children.

What is the latest on the fighting?

According to the Observatory, up to 45 people were killed in Wednesday’s bombardments. The Ghouta Media Centre reported 20 deaths.

Syrian soldiers and their allies could be seen on the move on the edge of the enclave on Wednesday while, in the distance, smoke trails from air strikes rose over the rebel-held town of Misraba.

Another village in the enclave, Beit Sawa, is reportedly now under full government control, with dozens of residents fleeing to Douma, the enclave’s largest town.

“We escaped Beit Sawa to come here, under the bombs,” one of them, Abu Qassem, told AFP. “The situation is completely dead. Finished. We’ve got no clothes. Nothing to change into. No food.”

Adnan, 30, a Douma resident who has been sheltering below ground with his wife and two-year-old daughter, told Reuters news agency by telephone: “It’s bad in the basement but it’s better than the bombing.”

Rebel factions in Ghouta denied that Beit Sawa had been seized, according to the Kumait news agency, which is affiliated with Jaysh al-Islam Islamist fighters.

What is being done to stop the violence?

Ali al-Za’tari, the UN humanitarian co-ordinator in Syria, appealed to the government in a letter to observe the ceasefire and allow medical supplies to be delivered, Reuters reports.

People in the Eastern Ghouta, he said, faced an “apocalypse intended, planned and executed by individuals within the Government, apparently with the full backing of some of their foreign supporters. It is urgent to reverse this catastrophic course, and to refer Syria to the International Criminal Court”.