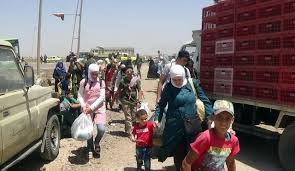 More than 120,000 civilians have been uprooted by a Syrian army offensive in the southwest since it began last week, a war monitor said on Friday, and a senior U.N. official warned of catastrophe as they risked being trapped between warring sides.

Government forces and their allies appeared to be making significant gains in eastern Deraa province, where state media said they marched into several towns. A rebel official said opposition front lines had collapsed.

The Russian-backed offensive has killed at least 98 civilians, including 19 children, since June 19, the Syrian Observatory for Human Rights said.

It has also driven tens of thousands of people toward the border with Jordan and thousands more to the frontier with the Israeli-occupied Golan Heights, the UK-based monitor said.

Israel and Jordan – which is already hosting 650,000 Syrians – say they will not let refugees in.

“We left under bombardment, barrel bombs, (air strikes by) Russian and Syrian warplanes,” said Abu Khaled al-Hariri, 36, who fled from al-Harak town to the Golan frontier with his wife and five children.

“We are waiting for God to help us, for tents, blankets, mattresses, aid for our children to eat and drink.”

U.N. High Commissioner for Human Rights Zeid Ra’ad al-Hussein said there was a grave risk of many civilians being trapped between government forces, rebel groups and Islamic State militants who have a small foothold there, an outcome he said would be a “catastrophe”.

“The real concern is that we are going to see a repetition of what we saw in eastern Ghouta – the bloodshed, the suffering, the civilians being held, being under a siege,” U.N. human rights spokeswoman Liz Throssell said.

Syrian government forces backed by Russian air power have turned their focus to the rebel-held southwest since defeating the last remaining besieged insurgent pockets, including eastern Ghouta, near Damascus. The assault has so far targeted Deraa, not rebel-held parts of nearby Quneitra province at the Golan frontier which are more sensitive to Israel.

The campaign has shattered a “de-escalation” deal negotiated by the United States, Russia and Jordan that had mostly contained fighting in the southwest since last year.

President Bashar al-Assad pressed ahead with the offensive despite U.S. condemnations and warnings of “serious repercussions”. The United States has told rebels not to expect military support against the assault.

The chief Syrian opposition negotiator Nasr al-Hariri on Thursday decried “U.S. silence” over the offensive and said only a “malicious deal” could explain the lack of a U.S. response.

The Kremlin said Russian President Vladimir Putin and U.S. President Donald Trump will have a detailed discussion about Syria when they meet in July.