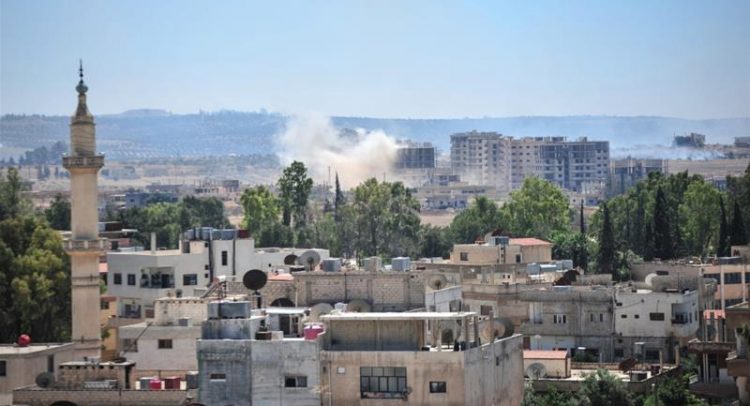 Syria’s war: Deraa has been ‘burnt to the ground’ Syrian government air raids have killed at least 20 civilians, mostly women and children, in parts of Deraa province, as forces loyal to President Bashar al-Assad continued in their offensive to retake the area from rebels.

Shelling resumed for the ninth consecutive day on Thursday in the rebel-held towns of al-Musayfirah, Hirak and Dael in the suburbs of southwestern province, activists and medics told Al Jazeera.

Meanwhile, Russian warplanes have continued to bombard other villages east of the province, members of Syrian Civil Defence known as the White Helmets, said.

“Deraa has been completely burnt to the ground,” Jihad al-Ali, a 26-year-old paramedic in Deraa told Al Jazeera as he described the effect of the ongoing attacks since Wednesday evening.

Syrian government forces launched the military push on June 19 in an attempt to retake the southern provinces of Deraa, Quneitra and parts of Sweida, mostly held by opposition fighters.

The offensive follows a similar bombardment campaign that was launched in Eastern Ghouta earlier this year, which displaced tens of thousands of people.

The government’s relentless bombardment has led to the destruction of civilian homes and numerous medical clinics and hospitals in several towns across Deraa.

“The infrastructure of homes and medical facilities belonging to the civil defence has been destroyed … It’s like they were never there,” Akram al-Mleihan, a pro-opposition activist in Hirak, told Al Jazeera as he described scenes of the attacks.

After capturing towns, including al-Lajah and Busr al-Harir on the western front, Assad’s forces have intensified their attacks on the eastern side of the province, forcing thousands to flee.

Al-Mleihan noted that since the start of the offensive, government forces backed by Russian warplanes launched some 150 air strikes and barrel bombs.

The attacks also included the use of at least five “elephant missiles,” activists said, using the term to describe the intensity and sound of the mortar rockets.

“It’s important to note that these missiles cause massive destruction,” 30-year-old Amer Abazeid, a spokesperson for the Syrian Civil Defence in Deraa, told Al Jazeera.

Medics on the ground currently estimate that at least 90 people have been killed since June 19, but the death toll “in reality is much larger”, Abazeid explained.

“There are conflicting reports on the number of deaths and we’re trying to verify everything to the best of our ability,” Abazeid explained.

Due to the intensity of the attacks, civil defence teams across the province are struggling to document the exact number of injuries and deaths.

It has been especially challenging with the lack of medical facilities, which previously also served as gathering points to help medics tally figures.