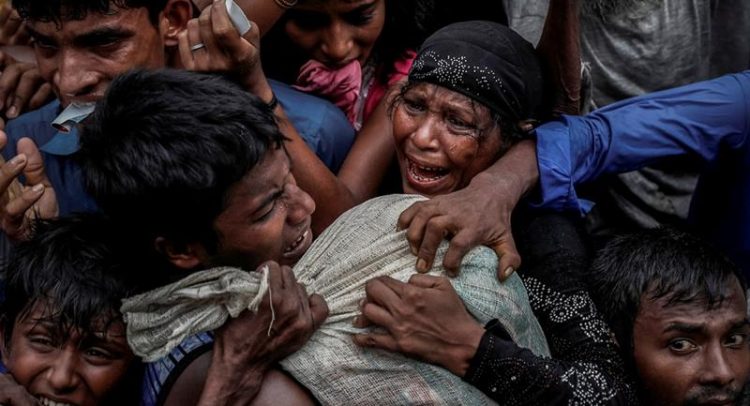 Myanmar authorities carried out “extensive and systematic preparations” against the Rohingya population in the months prior to the attacks by an armed Rohingya group last August, according to a new report by a rights organisation.

The army, known as Tatmadaw, used the deadly August 25 attack as a pretext to launch a bloody offensive that forced tens of thousands of Rohingya, often described as the most persecuted community in the world, to flee to neighbouring Bangladesh.

The 162-page report, titled They Gave Them Long Swords, published by Fortify Rights on Thursday, found that the Myanmar military is guilty of committing “crimes against humanity and genocide”.

The 162-page report, titled They Gave Them Long Swords, published by Fortify Rights on Thursday, found that the Myanmar military is guilty of committing “crimes against humanity and genocide”.

It detailed how the Myanmar authorities had planned for attacks against the Rohingya civilians in Rakhine State, resulting in more than 700,000 crossing the border into Bangladesh in the worst refugee crisis since the Rwandan genocide.

“The Myanmar military would like the world to believe that it was fighting terrorism in Rakhine State and that this was a spontaneous response to the attacks of ARSA,” Matthew Smith, the CEO of Fortify Rights, told Al Jazeera, referring to the Arkan Rohingya Salvation Army group.

“We have documented the way in which the military was making these systematic preparations weeks and months before August 25, 2017, which is when that attack by Rohingya militants took place,” he added.

The UN and the US have called Myanmar military action against Rohingya civilians “a textbook case of ethnic cleansing” – a charge the Myanmar government has repeatedly denied.

Over 200 interviews were conducted over a 20-month period with Rohingya eyewitnesses and survivors, current and former members of ARSA, Bangladesh military officials, Myanmar military, international and local humanitarian aid workers, and physicians.

The report found that the Myanmar authorities undertook several measures prior to August 2017, such as systematically disarming Rohingya civilians by confiscating household items that might be used as weapons or in self-defence.

“They came and took all the knives away,” said Rahana, a 50-year-old Rohingya mother of two from Nyaung Chaung village in Buthidaung township.

The authorities also trained and armed local non-Rohingya communities in northern Rakhine State to act as the “regional police”, the report said.

“They gave them long swords,” said Mohammed Rafiq, a 25-year-old Rohingya eyewitness to the massacre in the village of Tula Toli. “I could see it. [The soldiers] handed [Rakhine civilians] swords. Even young Rakhine boys were given long swords, and they were moving around with the swords hanging on their backs.”

Other measures included suspending humanitarian aid and access to the Rohingya, systematically tearing down fencing and other structures around Rohingya homes in order to provide the military with greater line-of-sight on civilians, enforcing a Muslim-only curfew, and building up an unusually sizable military presence.

“One thing that we’ve learned – and the Rohingya community above all have learned – is that following the October 2016 violence, there was almost complete inaction from the international community, and that essentially paved the way for genocide to take place,” Smith said.

“We do have hope this will spur meaningful international action,” he continued.

“We have sent the report to the International Criminal Court and, right now, UN Security Council member states should apply unprecedented leverage against other member states on the Council to ensure that there is an ICC referral urgently.”

The report has also called for UN Security Council members to issue a global arms embargo on the Myanmar military, and to sanction the individuals responsible for atrocities against Rohingya and others.

“These individuals – such as General Min Aung Hlaing who has largely escaped detention for his role in orchestrating these genocidal attacks – should not only be sanctioned by governments but they should be investigated and potentially prosecuted for genocidal crimes against humanity,” Smith said.

A Myanmar government spokesperson did not respond to a request for comment by AFP news agency.