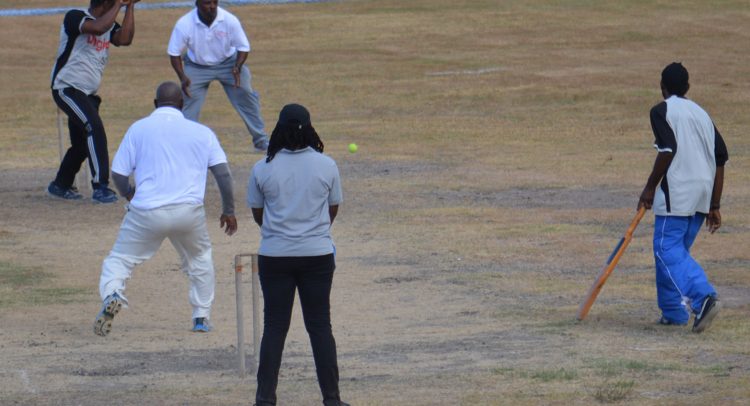 BASSETERRE, ST. KITTS, August 20, 2018 (PLP PR Media Inc.)  — This year’s edition of the James Harris T20 Cricket League in Mansion, which bowled off on Sunday August 12, has been dubbed ‘Boys on the Ground’. Defending champions Christchurch’s game against newcomers HMP Ballers was rained off and each team received a point, while the second game between Guyanese and Lodge Village has been rescheduled for a later date.

Games played on Sunday August 19 went according to schedule, when Back Street of Mansion came up against Tabernacle at the Mansion Cricket Stadium. Back Street batted first and made 87 for 6 from their twenty overs with Gary Rogers 38 and Captain Noval McCall 19. Bowling for Tabernacle, Rastapo Carey took 2 for 9, and U. Griffin took 2 for 23.

In Tabernacle batting, they made 88 runs for 6 in 18.2 overs with Captain Vaughn Patrick 25 not out, while bowling for Back Street saw Javan Debble take 1 for 14, and Myron Lawrence taking 1 for 17. Tabernacle won by four wickets, the first win in this year’s edition of James Harris T20 Cricket League.

Eight teams are taking part in this year’s ‘Boys on the Ground’ James Harris T20 Cricket League. They have been divided in two groups, where Group ‘A’ has the defending champions Christchurch, Front Street Limers of Mansion, Molineux, and newcomers HMP Ballers. Group ‘B’ has Lodge Village, Back Street of Mansion, Tabernacle, and Guyanese.

‘Boys on the Ground’ James Harris T20 Cricket League resumes with two games on the card on Sunday August 26 at the Mansion Cricket Stadium. The first is a Group ‘A’ game at 1:15 pm between Molineux and defending champions
Christchurch; while the second is a Group ‘B’ game between Tabernacle and Lodge Village.

Green Juice: Is it worth the excitement?

Granger Returned As Leader Of PNC/R