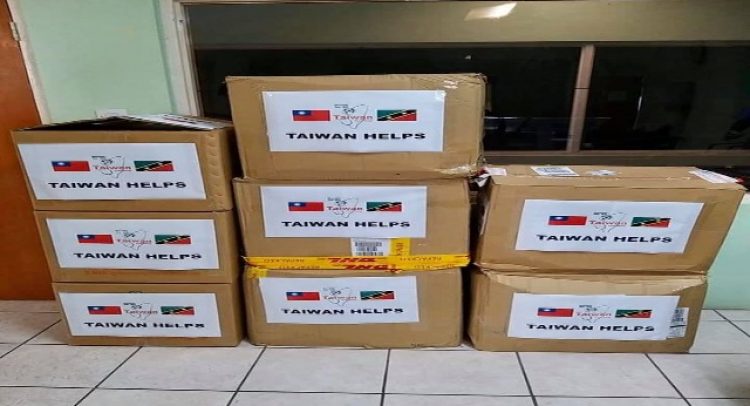 Basseterre, St. Kitts, Thursday, 16th April, 2020, (My Vue News.com) – While the United States, in recent weeks, has blocked the shipment of much needed medical equipment and supplies to Caribbean nations, Taiwan, has proven again that its friendship with countries in the region, is genuine and caring.

Leaders from Barbados, Cayman Islands and Bahamas have all expressed disappointment over the decision by US authorities to prevent these territories from obtaining the supplies, especially ventilators, needed to save lives.

In addition to ventilators, masks are in high demand.

And here is where Taiwan has shown that it is truly a friend of St. Kitts and Nevis and other states in the region, with whom it has diplomatic relationship.

Earlier this week, the resident ambassador for Taiwan in St. Kitts and Nevis, presented 40,000 masks, to help the government in its difficult fight against the Coronavirus. For many countries, including the United States, masks are hard to secure and creative alternatives have had to be introduced.

To date, the country, has had no deaths, but has recorded 14 confirmed cases. With limited resources at its disposal, this gift from Taiwan will greatly assist frontline workers, such as doctors, nurses, security forces, disaster managers and others, now in the field dealing with this issue.

A statement from the embassy in Basseterre, said that “In addition, 6 thermal detectors (thermal imaging cameras), a batch of thermometer temperature guns will be on the way from Taiwan shortly.”

The decision to make the donation, came as a result of the Taiwanese anticipating the immediate needs of the St. Kitts and Nevis government.

A source from the local Taiwanese embassy also told MyVue News.com that this donation is a symbol of the existing relationship because “friendship is what matters,” at this time.

The donation from Taiwan, comes at a time when they too have been waging a war against the virus. However, that country, like South Korea has taught the world many lessons about dealing with the virus.

Though they experienced a sharp spike in cases in early March, they managed to slow the spread by early April. Today, they have had 6 deaths and 395 cases. The US on the other hand, has had over 645,000 cases and 29,215 deaths.

The donation from Taiwan was handed over to the Minister of Foreign Affairs, Mark Brantley, by Ambassador Tom Lee, on Wednesday, 15th April, 2020.