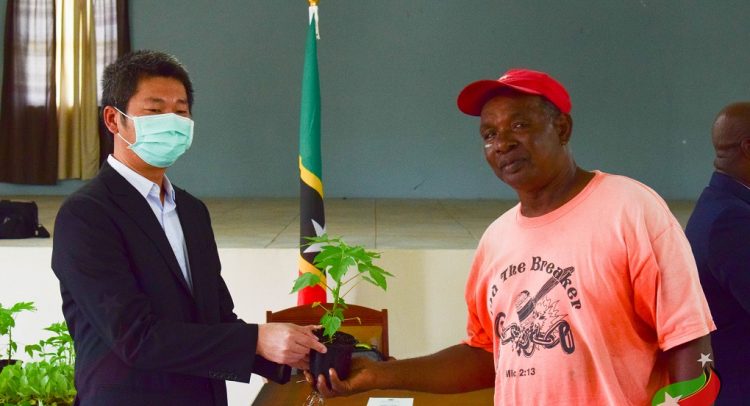 The Republic of China (Taiwan) continues to partner with the Department of Agriculture with its donation of seeds and seedlings to boost agricultural production in the Federation.

At a handing over ceremony held on October 12, Minister of Agriculture, the Honourable Alexis Jeffers expressed his thanks to Taiwan for its continued support in the Agricultural Sector.

“Of course, much emphasis has been placed on Agriculture over the years and of course the Federation of St. Kitts and Nevis has benefited tremendously from their technical support and also their innovation in terms of the production of various crops,” said the Honourable Minister.

“This ceremony is another indication of their support to agriculture in the Federation. I believe it was the 23rd of July when a donation was made of seeds to the Federation of St. Kitts and Nevis and just a little over two months later, they are back again giving a further donation to the sector,” said Minister Jeffers.

“This interest should have been ongoing and building on it over the years but of course there would have been other things that would have happened within the Federation over the last 20 years where persons would have diverted or shifted their attention to other areas, whether tourism or financial services,” he added.

“Moving forward we should be in good standing because these seedlings in a few months we should be able to reap some crops that would feed us going into the end of this quarter,” Minister Jeffers said.

Superintendent Henry speaks to importance of quarantine during COVID-19 pandemic