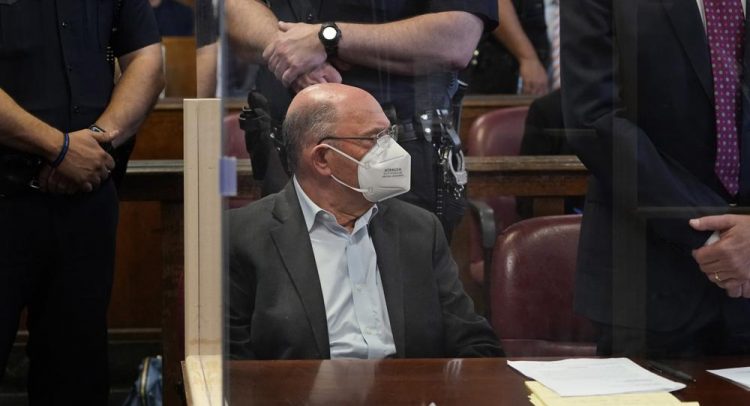 TAKEAWAYS: Trump’s safe for now, but company’s in hot water

Prosecutors say this is serious. Weisselberg alone, they say, cheated the federal government, state and city out of more than $900,000 in unpaid taxes.

TRUMP WASN’T CHARGED. IS HE OUT OF THE HOT SEAT?

WHAT ARE THE TRUMP ORGANIZATION AND ALLEN WEISSELBERG CHARGED WITH?

WHAT DOES THAT MEAN, PRACTICALLY?

The indictment says Weisselberg failed to pay taxes on more than $1.7 million worth of off-the-books perks.

WHAT DID WEISSELBERG GET FROM THE COMPANY?

The Trump Organization paid the rent on his Manhattan apartment, covered private school tuition for his grandchildren, leased him and his wife Mercedes-Benz automobiles, gave him cash to hand out as holiday tips and paid for flat-screen TVs, carpeting, and furniture for his winter home in Florida. Weisselberg’s son also didn’t have to pay rent, or paid a below-market rent, while living in Trump-owned apartments.

Prosecutors say Weisselberg claimed a house on Long Island as his official residence, rather than the Manhattan apartment where he spent a majority of his time. That enabled him to avoid paying the city’s income tax.

WHAT DO LAWYERS FOR THE TRUMP ORGANIZATION AND WEISSELBERG SAY?

Weisselberg’s attorneys have taken a low-key approach, saying only that he’ll fight the charges. The Trump Organization’s lawyers say it is an outrage, and that companies do things like this all the time and aren’t prosecuted or even punished. Trump, a Republican, excoriated the case as a “political Witch Hunt by the Radical Left Democrats.”

WAIT — JUST WHAT DOES THE TRUMP ORGANIZATION ACTUALLY DO?

It’s a business entity through which Trump manages his many entrepreneurial affairs, including his investments in office towers, hotels and golf courses, his many marketing deals and his television pursuits. It’s sprawling, but its operations are simple and behind the scenes: It runs golf clubs and hotels, collects checks from companies occupying offices it owns, and charges licensing fees to buildings and others using its name.

COMPANIES DO OFFER TOP EXECUTIVES FANCY PERKS. WHY IS THE TRUMP ORGANIZATION BEING TARGETED?

Perks that aren’t legitimate business expenses have to be reported as taxable income. You can’t help employees avoid income tax by paying them in lots of free stuff.

PROSECUTORS ASSERTED THE ‘MOST SENIOR EXECUTIVES’ WERE BEHIND THE ALLEGED SCHEME. THEN WHY WAS WEISSELBERG THE ONLY INDIVIDUAL CHARGED?

DOES RUDY GIULIANI HAVE ANYTHING TO DO WITH THIS?

No. There is an ongoing investigation by federal prosecutors in New York into Giuliani’s work for Trump in Ukraine, but it is not related to this inquiry by state prosecutors.

HOW DID THIS ALL GET STARTED?

After Trump’s former personal lawyer, Michael Cohen, got indicted for tax evasion and other offenses, he publicly claimed that the Trump Organization frequently found ways to dodge taxes. That got prosecutors extra interested. Prosecutors also got help from Jen Weisselberg, who had a bitter divorce from Weisselberg’s son.

SO IS ALLEN WEISSELBERG BEHIND BARS NOW?

No. He is free pending trial, though he had to turn over his passport so he can’t leave the country.

WILL WEISSELBERG TURN ON TRUMP?

The charges could enable prosecutors to pressure Weisselberg to cooperate with the investigation and tell them what he knows. He might cooperate to try to avoid a tough prison sentence. But prosecutors haven’t actually accused Trump himself of breaking any laws. Although Trump’s signature was on some checks at the center of the case, nothing in the indictment addressed whether he was personally aware of how the company treated Weisselberg’s compensation for tax purposes. And Weisselberg’s been a loyal lieutenant to the Trump family for decades.

SO WHAT HAPPENS NEXT?

Everybody has to come back to court in late September to begin the process of getting ready for a trial. New York City’s judicial system is seriously backlogged because of the coronavirus pandemic so this could take awhile.

The Trump Organization’s Chief Financial Officer Allen Weisselberg appears in court in New York, Thursday, July 1, 2021. Weisselberg was arraigned a day after a grand jury returned an indictment charging him and Trump’s company with tax crimes. Trump himself was not charged. (AP Photo/Seth Wenig,Pool)

Address on the occasion of 25th Anniversary of Self Employed Coverage