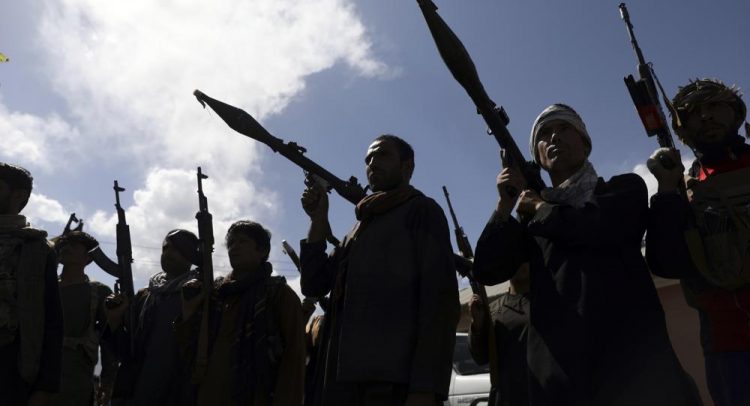 When the explosions died down and Syed Akram finally emerged from his home earlier this week, three of his neighbor’s children had been killed, and a tank was burning on a nearby street corner. Several shops and a petrol station were still smoldering. In the streets, the Taliban were in control.

There were maybe 300 of them, he said. That had been plenty to overwhelm the government troops defending the town, who had numbered fewer than 100. Akram saw several bodies of soldiers in the street, but many had fled the district center.

In recent days, the Taliban have made quick gains in Afghanistan’s north, overrunning multiple districts, some of them reportedly with hardly a fight, even as the U.S. and NATO press forward with their final withdrawal from Afghanistan. By all accounts their departure will be complete long before the Sept. 11 deadline set by President Joe Biden when he announced in mid-April an end to America’s “forever war.”

The Taliban gains are significant because of the transportation routes they provide the insurgents. But equally significant is that the north is the traditional stronghold of Afghanistan’s minority ethnic groups, who aided the U.S.-led invasion that drove the Taliban from power nearly 20 years ago and have been part of the ruling leadership since.

The traditional stronghold of the Taliban, who are mostly ethnic Pashtuns, has been in the country’s south and east.

With the recent gains, Taliban now control the main border crossing with Tajikistan, a main trade route. They also hold the strategic district of Doshi, critical because the one road linking Kabul to northern Afghanistan runs through it.

As a result, a worried government this week launched what it called National Mobilization, arming local volunteers. Observers say the move only resurrects militias that will be loyal to local commanders or powerful Kabul-allied warlords, who wrecked the Afghan capital during the inter-factional fighting of the 1990s and killed thousands of civilians.

“The fact that the government has put out the call for the militias is a clear admission of the failure of the security forces … most certainly an act of desperation,” said Bill Roggio, senior fellow at the U.S.-based Foundation for Defense of Democracies. Roggio tracks militant groups and is editor of the foundation’s Long War Journal.

“The Afghan military and police have abandoned numerous outposts, bases, and district centers, and it is difficult to imagine that these hastily organized militias can perform better than organized security forces,” he said.

On Wednesday at Koh Daman on Kabul’s northern edge, dozens of armed villagers in one of the first National Mobilization militias gathered at a rally. “Death to criminals!” and “Death to Taliban!” they shouted, waving automatic rifles. Some had rocket propelled grenade launchers resting casually on their shoulders.

A handful of uniformed Afghan National Police officers watched. “We need them, we have no leadership, we have no help,” said Moman, one of the policemen.

He criticized the Defense and Interior Ministries, saying they were stuffed with overpaid officials while the front-line troops receive little pay.

“I’m the one standing here for 24 hours like this with all this equipment to defend my country,” he said, indicating his weapons and vest jammed with ammunition. “But in the ministries, officials earn thousands” of dollars. He spoke on condition he be identified only by his first name for fear of reprisals.

The other police standing nearby joined in with the criticism, others nodding in agreement. New recruits in the security forces get 12,000 Afghanis a month, about $152, with higher ranks getting the equivalent of about $380.

The U.S. and NATO have committed to paying $4 billion annually until 2024 to support the Afghanistan National Security and Defense Forces. Still, even Washington’s official watchdog auditing spending says Afghan troops are disillusioned and demoralized with corruption rife throughout the government.

As the districts fell, Afghan President Ashraf Ghani swept through his Defense and Interior Ministries, appointing new senior leadership, including reinstating Bismillah Khan as defense minister. Khan was previously removed for corruption, and his militias have been criticized for summary killings. They were also deeply involved in the brutal civil war that led to the Taliban’s takeover in 1996.

Afghan and international observers fear a similar conflict could erupt once more. During the 1990’s war, multiple warlords battled for power, nearly destroying Kabul and killing at least 50,000 people — mostly civilians — in the process.

Those warlords returned to power after the Taliban’s fall and have gained wealth and strength since. They are jealous of their domains, deeply distrustful of each other, and their loyalties to Ghani are fluid. Ethnic Uzbek warlord Rashid Dostum Uzbek, for example, violently ousted the president’s choice for governor of his Uzbek-controlled province of Faryab earlier this year.

A former adviser to the Afghan government, Torek Farhadi, called the national mobilization “a recipe for future generalized violence.”

He noted the government has promised to pay the militias, even as official security forces complain salaries are often delayed for months. He predicted the same corruption would eat away at the funds meant for militias, and as a result “local commanders and warlords will quickly turn against him (Ghani) and we will have fiefdoms and chaos.”

Taliban spokesman Zabihullah Mujahid told The Associated Press on Thursday that the insurgents captured 104 districts since May 1, including at least 29 in recent fighting. That brought the total area of Taliban control to 165 of Afghanistan’s 471 districts nationwide.

There was no way to immediately verify his statements, and some areas often change hands back and forth. Most analysts tracking the front lines say the Taliban control or hold sway in roughly half the country. Their areas of control are mostly in rural areas.

Officials and observers say many across the country have allegiance to neither side and are deeply disillusioned by corruption, which has resulted in ordinary Afghans benefiting little from the trillions of dollars in international assistance pumped into the country the past 20 years.

“There is no stability. There is no peace,” said Abdul Khasani, an employee at a bus station not far from the Koh Daman militia gathering.

Afghan militiamen join Afghan defense and security forces during a gathering in Kabul, Afghanistan, Wednesday, June 23, 2021. Taliban gains in north Afghanistan, the traditional stronghold of the country’s minority ethnic groups who drove the insurgent force from power nearly 20  years ago, has driven a worried government to resurrect militias whose histories have been characterized by chaos and widespread killing. (AP Photo/Rahmat Gul)