The win also heaped more pressure on the Trinidad & Tobago Red Steel, who remains winless after three games. On Wednesday night though, Dwayne Bravo would have felt he had only himself to blame as the Red Steel edged closer to crashing out of the tournament.

The highlight of the match came in the 19th over of the Jamaica Tallawahs innings when Bravo opted to bowl himself. Danza Hyatt struck the first six, followed by three from Vernon Philander in an over that cost 26 runs.

Before the over, the Tallawahs were 107/6. After the over, they were 133/6. It was little consolation in the end that Bravo struck a quick 29 runs from 24 balls to give the Red Steel some hope.

The Tallawahs never looked like getting past 120 though. Bravo had sent them in. Chris Gayle and Ahmed Shehzad took advantage of the Powerplay. It wasn’t bad bowling from the Red Steel all the time. Some of the shots were risky and paid off.

The opening stand put on 44 runs just inside six overs before Shehzad was well caught by Benn at mid-off. Delorn Johnson, who had came into the side, had struck first. But immediately after the Powerplay, things had slowed tremendously for the Tallawahs.

Nkrumah Bonner had joined his captain but couldn’t get away the Red Steel bowlers. Bravo kept mixing his bowlers well. As the halfway stage of the innings neared, the Tallawahs had added only 13 runs since Shehzad’s wicket. Bonner, not even attacking, was bowled by a delivery from Cooper that cut back sharply at him.

Gayle followed the very next over, as the Bravo brothers combined to have the lanky Jamaican caught at deep mid-wicket. Gayle had made 28 from 29 balls and the Tallawahs were quickly in trouble at 65/3.

The bowling got tighter and better for the Red Steel as the innings progressed. The Tallawahs looked like they would struggle to get to 120. Slowly, the Tallawahs batsmen edged the scoring along. Wickets kept falling along the way.

With two overs left in the inning, Bravo opted to bowl himself out. Samuel Badree who had bowled two overs for seven runs, including the wicket of Jacques Rudolph for 6 was ignored. Bravo would be made to regret his decision, for maybe the tenth match in a row.

When he wasn’t short, he was full. When he wasn’t full, he was wide. Whatever he bowled seemed to disappear over the boundary. Four sixes had been hit in the over, and already the Red Steel knew they had gone from a position to one overfilled with doubt in the space of eight balls. There were also two wides in the over.

Hyatt finished on 42 not out while Philander was unbeaten on 23 runs from just eight balls. The Tallawahs ended on 146/6, maybe 26 more than they looked like they would once stumble to.

As the Red Steel got out to chase the target, the new opening pair of Adrian Barath and Kevin O’Brien got off to a slow start. The confidence seemed to have been lost in the team.

The first two overs went for five runs. Off the last ball of the second over, O’Brien trying to make something happen, walked across his wicket only to be bowled. Barath looked in fine touch, but the task at that stage looked too big for his little shoulders.

He found a good partner in Ross Taylor, who seems to be finding better form with every match. Both batted well putting on 62 runs for the second wicket. Taylor batted sensibly, and is quickly coming back to his best. The only thing is his best may arrive when the Red Steel are out of the competition.

After he pulled a long-hop from Chris Gayle straight to Shehzad at short mid-wicket, the Red Steel would collapse under pressure, and that’s not even a pun. From 75/3, it became 82/4.

With six overs remaining in the innings and Barath gone for 32 and Taylor 31, it was left up to the Red Steel’s big hitters had to fire.  The only thing is they haven’t fired for the tournament so far. Darren Bravo struggled to 8 before Muttiah Muralitharan ended his and the Red Steel’s misery. He wasn’t taking the score anywhere.

Dwayne Bravo, who needed to repay his team the 26 runs he conceded in the penultimate over did just that. He offered some hope, dashing out his brilliance. But it just seemed too late. With four overs to go, he struck Nikita Miller for two huge sixes, but even those shots couldn’t dent the fast rising Required Run Rate.

With two overs left to get 30 runs, Andre Russell delivered the perfect over. His second ball got Bravo’s top edge that was well held by Baugh, who had to run to square-leg. A brief check from Umpire Peter Nero for a no-ball only tortured the fans with false hope. Pooran struck a boundary in the over to leave 21 runs needing from six balls.

Vernon Philander stepped up to the task. His second ball, a short one, was pulled just over fine-leg for 6. But he returned well, only allowing the singles. By the time of the last ball, the game was well out of the reach of the Red Steel.

They need 13 runs to win. Cooper struck Philander’s full last ball over cover for six, but the Tallawahs had emerged victorious in a game they spent the best part of the first half chasing.

Bravo had not learnt his lesson. And if he had, the Red Steel would have been back in the hotel by the time of Philander’s last ball.

A Shehzad c Benn b Johnson 20

A Russell run out (Darren Bravo/Cooper) 2

V Philander not out 23

A. Barath c Bernard b Russell 32 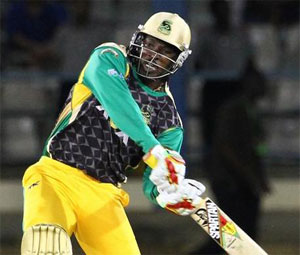