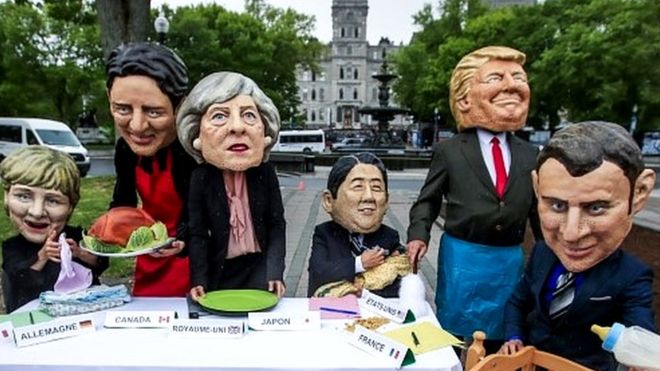 Tariffs and Trump: War of words ahead of G7 summit 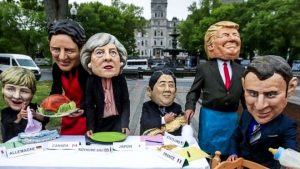 Leaders of the G7 group are gathering in Canada for what could be one its most acrimonious summits in years.

On the eve of the meeting, the French and Canadian leaders clashed with US President Donald Trump on the summit’s key issue – trade tariffs.

Mr Trump, expected to be the last to arrive and first to leave, has imposed steel and aluminium tariffs that have sparked reprisals from trade partners.

There could also be clashes with Mr Trump over Iran and climate change.

The G7 summit, which groups Canada, the US, the UK, France, Italy, Japan and Germany, begins on Friday in the town of La Malbaie in Quebec.

The leaders of the nations, which represent more than 60% of global net worth, meet annually. Economics tops the agenda, although the meetings now always branch off to cover major global issues.

Stocks in Asia and Europe were down pretty much across the board in anticipation of a tense summit.

What were the exchanges on the eve of the summit?

It was mainly France and Canada v Donald Trump.

Although much has been made of the bonhomie between the US president and French counterpart Emmanuel Macron, the latter was pulling no punches ahead of the talks.

In a tweet, Mr Macron said if Mr Trump wanted to be isolated, the six other nations would sign their own agreement if need be “because these six countries represent values, they represent an economic market which has the weight of history behind it and which is now a true international force”.

Host leader Justin Trudeau has also flirted with a “bromance” approach to Mr Trump but has appeared far more confrontational recently, particularly with the stalling of talks over the North American Free Trade Agreement (Nafta).

He described Mr Trump’s citing of national security to defend his steel and aluminium tariffs as “laughable”.

Never one to back down, Mr Trump fired off defiant tweets, accusing Mr Trudeau of being “indignant” and the European Union and Canada of erecting “massive trade tariffs and non-monetary trade barriers against the US” for years.

“Take down your tariffs and barriers or we will more than match you,” he wrote.

UK Prime Minister Theresa May appeared to take a more conciliatory approach, saying she wanted the EU to act with restraint and proportion in retaliating to the US tariffs.

It is likely that Brexit, in particular trade deals following the UK’s exit from the EU, will also be on her agenda.

Unlike Mr Macron and Mr Trudeau, she won’t be having a bilateral meeting with Mr Trump, but insisted on Friday it was not a snub.