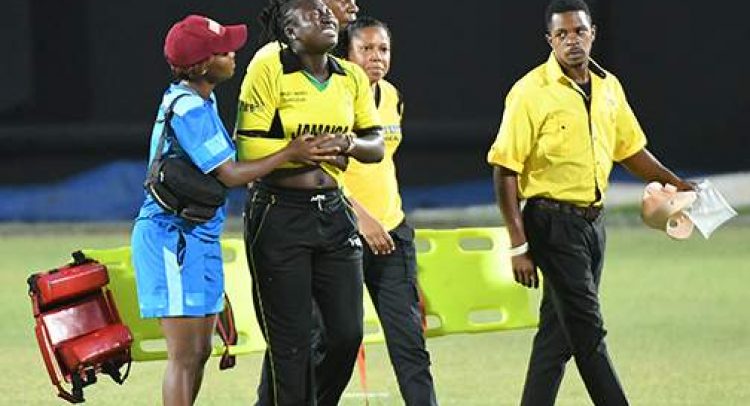 Taylor sidelined with injury, Matthews fails to fire for Hurricanes

SYDNEY, Australia (CMC) – Injured West Indies Women’s Captain Stafanie Taylor was a non-starter and fellow Windies Women’s all-rounder Hayley Matthews made a minor contribution in the final round of preliminary matches in the Women’s Big Bash League on Sunday.

Taylor was not expected to play after sustaining a leg injury on Saturday, but she watched her Adelaide Strikers teammates upstage semi-finals bound Perth Scorchers by three runs to close out their participation in this season’s competition in a thrilling fashion.

Matthews returned to the Hobart Hurricanes line-up, after not playing in the previous two matches. She was dismissed for a four-ball duck and took one for 12 in three overs with her uncomplicated off-spin, but the Sydney Thunder confirmed their place in the semi-finals with a six-wicket victory.

At North Sydney Oval, the Strikers fought back to pull off an incredible upset win over the Perth Scorchers against the odds, finishing their season on a high note, after being knocked out of semi-finals contention on Saturday.

Amanda-Jade Wellington hit five fours and two sixes in the top score of 48 from 25 balls and led a solid batting effort for the Strikers to reach 159 for six from their allocation of 20 overs, after they were put into bat.

Mack and Woolvaardt added 57 for the second wicket to hold the top order together before Wellington led the late charge, dominating a fifth-wicket stand of 43 with Bridget Patterson before falling to the penultimate ball of the innings.

Rookie England Women’s pacer Sarah Glenn was the pick of the Scorchers bowlers, taking four for 18 from her allotted four overs.

Devine was caught behind off Australia Women’s pacer Tahlia McGrath for 57 off 42 balls that included nine fours and triggered a period of instability in the Scorchers batting.

Five wickets fell for 20 in the space of 19 balls and Scorchers found themselves needing 22 from the final three overs, before the match came down to the Scorchers needing nine from the final over, which was bowled by Australia Women’s pacer Sarah Coyte.

Jemma Barsby was run out off the first ball of the over, a dot-ball and three singles followed, as the Scorchers struggled against Coyte, the top wicket-taker in the competition.

Needing five off the final ball, the Strikers remained in the hunt, as Katie Mack collected in the field, returning the ball to the bowler as Coyte took the bails off, claiming a final wicket, and victory, for her team.

Strikers ended sixth in the preliminary competition on 13 points and the Scorchers finished fourth on 14 points and will face chart-toppers Melbourne Stars in the semi-finals on Wednesday in a double-header at North Sydney Oval.

At Drummoyne Oval, batting was once again the bugbear for the Hurricanes and Matthews was one of the batsmen that fell cheaply and sunk the Hobart side to four runs for three wickets in the first three overs.

They never fully recovered and were restricted to 115 for nine from their allocation of 20 overs, after they were put into bat.

New Zealand Women’s wicketkeeper/batsman Rachel Priest hit 32 and Sasha Moloney gathered the top score of 39, sharing 57 for the third wicket to give the innings a bit of substance.

A late flurry for 24 not out from their Captain Corinne Hall pushed them over the 100-run mark, with South Africa Women’s fast bowler Shabnim Ismail taking three for 10 from her allotted four overs and Hannah Darlington grabbing three for 24 from her four overs to be the main destroyers of the Hurricanes batting.

Missing new-ball bowler, Belinda Vakawera, who injured herself in the previous day’s match against the Scorchers, a target of 116 was always going to be tough total defend.

When Hall also came from the field with an injured calf midway through the innings, things continued to get worse for the Hurricanes.

The Canes rallied as best as they could, but the England Women’s pair of Tammi Beaumont with 22 and Heather Knight with 25 set things up for the Thunder and they formalised the result with 19 balls remaining.

Hurricanes ended at the bottom of the eight-team table on eight points, and the Thunder finished third on 16 and will meet second Brisbane Heat in Wednesday’s semi-final double-header at North Sydney Oval.

Main Photo: TAYLOR(2nd left)… watched from the sidelines after sustainin