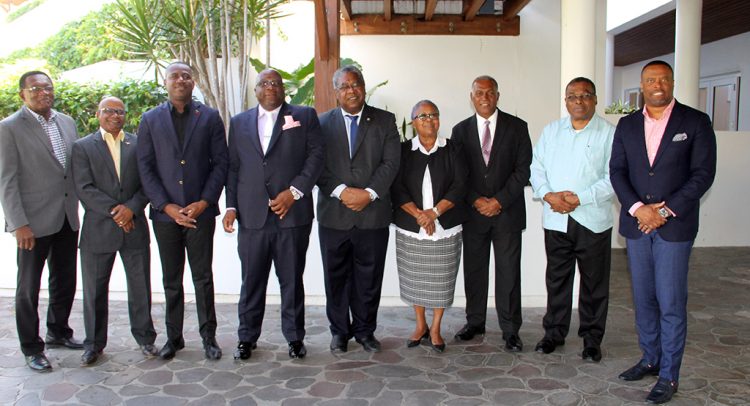 BASSETERRE, St. Kitts, May 23, 2018 (Press Unit in the Office of the Prime Minister) – Prime Minister Dr. the Honourable Timothy Harris used Sunday’s (May 20) Open Forum at the Edgar T. Morris Primary School in Tabernacle to again expressed his gratitude to his Cabinet colleagues for their unwavering support and commitment to the people of St. Kitts and Nevis.

Addressing hundreds of supporters and well-wishers at the event, Prime Minister Harris, who is also the Chair of the Federal Cabinet, stated that contrary to reports and claims purported by the opposition, his Team Unity Cabinet is well run and managed, where every member is free to express his or her views and that those views are respected by all “because we are a team, and I, as chair of Cabinet, has the job of deciphering where the Cabinet consensus is.”

The prime minister also rubbished claims being made by Team Unity detractors that members within the Cabinet have called for his resignation. Dr. Harris stated emphatically that no member of the Federal Cabinet has asked him to step down as prime minister.

The honourable prime minister further noted that he has been fortunate to have in the Cabinet Senior Minister, the Honourable Vance Amory, whom he described as an excellent statesman who brings with him a wealth of experience and knowledge from which he draws inspiration.

“My confidence in him has never one day been found wanting,” Prime Minister Harris disclosed. “Vance is an honourable man; a leader on whom you can depend. He brings the wisdom and experience and the selflessness in giving advice. You don’t have to second guess his motives and that is why in Cabinet with difficult matters, they would tell you I make sure Vance gives a word.”