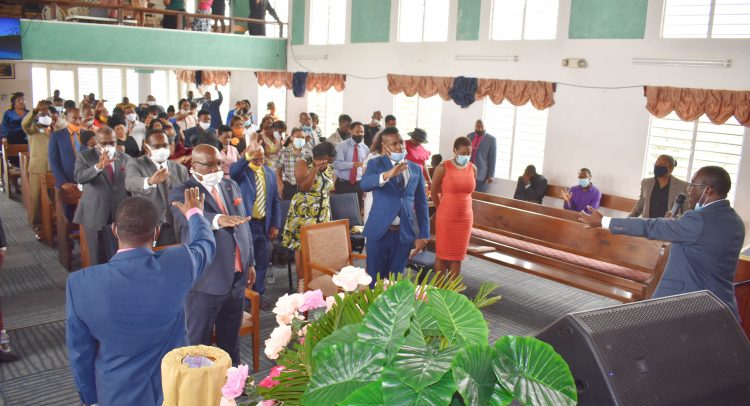 For a country which operates as a ‘Nation under God’, Prime Minister Dr the Hon Timothy Harris has advised that one of his moments of regret was when government was forced to restrict the congregation of the church in the wake of the Covid-19 pandemic.

“We have a lot to give God thanks for and we can say what a glorious day today is, and we can say as a people of St. Kitts and Nevis, we have always put our hope in God,” said Prime Minister Harris on Sunday June 21 as he introduced members of the Team Unity Cabinet who had joined him at a praise and worship service held at the Mt. Carmel Baptist Church, Lemon Hill in Bourryeau.

He told the congregation, which included Governor General’s Deputy His Excellency Michael Morton, and the executives of the Peoples Labour Party (PLP) and the People’s Action Movement (PAM) that he was profoundly overjoyed and that he understood the role of the spiritual communion which people must have in the life of the Nation.

“And as we reflected over the Covid-19 and our efforts to fight that and to apply the science, one of my moments of regrets was when we had to restrict the congregation of the church, because I knew that we still needed to pray,” said Dr Harris.

The Honourable Prime Minister however informed the congregation that curfew hours have gradually been relaxed to the level that the curfew now starts at 12:00 midnight and it goes to 5:00 in the morning. That, he said, therefore allows people to come and to hold evening services and to do all the things that are needed to be done.

He added that because of the need for God and the spiritual development of the people, the Team Unity Administration in its first term and the one that has just started “ensured that we assign portfolio responsibility for Ecclesiastical Affairs, and in this regard in this new Cabinet we have vested that responsibility for Ecclesiastical Affairs in the Hon Eugene Hamilton, and we wish him well in the outreach to the church.”

During the worship service, the church not only observed hand sanitisation, social distancing and face mask wearing protocols, but went further by having body temperatures of all persons entering the sanctuary taken using handheld infrared thermometer guns.

The Mt. Carmel Baptist Church, the Prime Minister said, has always provided him and his entourage a sense of joy and a sense of welcome and he thanked Pastor Michael Penny and the church leadership for always welcoming them to the church in a very special way.

On behalf of the church founder, Bishop Dr Kelvin C. Jones, who was at home observing social distancing, and the pulpit ministry at the Mount Carmel Baptist Church, Pastor Penny welcomed the Prime Minister, members of the Cabinet and the regular congregants.

“The Prime Minister is coming out to tell us about renaming the roundabout that was done here as part of the Island Main Road resurfacing and we really believe that the roundabout should be named after Kelvin Jones – if not the roundabout then the street down there, as he has done a lot for the area and the community,” said Pastor Penny.

He added: “The idea is the church would like to adopt the roundabout because it is near to the church and we have in this area done a lot of work. So it is something that we are looking forward to.”

Prime Minister Harris did not give a direct ‘yes’ or ‘no’ but in congratulating one of the country’s top singers, Ms Shinelle Willett who performed in church, he said he looked forward to seeing her sing at the next Music Festival and “the next special event at the celebration we will have for the next roundabout and we will name it after somebody, and we will invite the pastor to come and do the blessing.”

Main Photo: Pastor Michael Penny (right) and Deacon Melvin James (left) pray for members of the Cabinet and the congregation at the Mt Carmel Baptist Church on June 21.