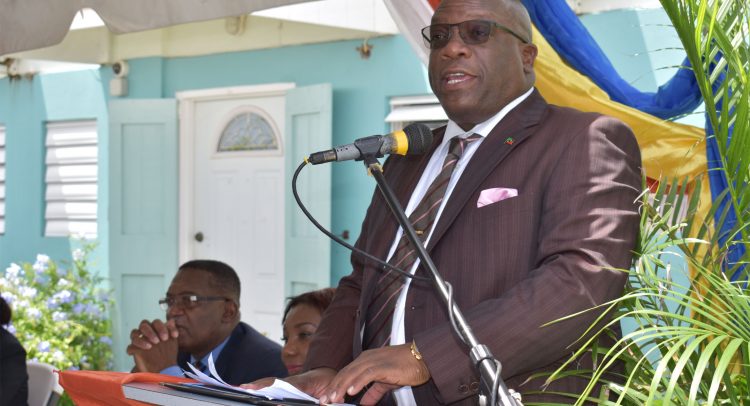 Team Unity Government has a proud record in healthcare delivery BASSETERRE, ST. KITTS, August 1, 2018 (PLP PR Media Inc.)* — Prime Minister, Dr the Hon Timothy Harris, has told the nation that the Team Unity Government has a proud record in healthcare delivery and in three short years has done what the previous government had failed to do in the twenty years it was in power.

“I want to say, in my view, we (the Team Unity Government) have a proud record in healthcare delivery,” said Dr Harris on Tuesday July 31 at a ceremony held at the Mary Charles Hospital in Molineux to re-commission the hospital’s Dental Clinic and EMT/Ambulance Service.

“For our part, I want to make the point that the Team Unity Government is a caring government, and I know that the election losers would want you to believe that we have not been doing anything to advance your healthcare. But you have the examples of what we are doing, right here in Molineux to confront them, and to ask them why for twenty years they didn’t do what Harris Administration is now doing.”

Prime Minister Harris in his feature remarks told the gathering that the Team Unity Government had in December 2016 opened an Oncology (cancer care
and treatment) Unit at the JNF Hospital, and a Mental Health Day Treatment Centre. In February this year the Government officially launched the National Insurance Commission, which sets the stage for cradle-to-grave insurance coverage regardless of age, employment, income or pre-existing conditions which the former government never did in its twenty years in office.

“Today we come back to Mary Charles Hospital, further cementing out commitment and delivering on our promise to provide all of you with state-of-the-art healthcare that is on par with the other medical
districts,” said the Prime Minister who added that the previous government had allowed the hospital, which serves the Saddlers to Keys District, to run down to the extent that two months into the Team Unity Government’s tenure the hospital’s roof collapsed.

“That is the bad legacy that we inherited, and we have had to grapple with these things, correcting the ills of the past, while we are bringing new things like cancer care and treatment, and mental health care to the citizens of St. Kitts and Nevis. This is in fact the best government that we have had in this country for a very long time. So today we come again, delivering for you,” observed the Prime Minister.

Prime Minister Harris reminded the cheering crowd that also included the Deputy Prime Minister the Hon Shawn Richards, Minister of Health the Hon Eugene Hamilton, Senior Minister the Hon Vance Amory, and Minister of State for Health the Hon Wendy Phipps: “And if you have a good memory you will recall that in our very first year in office we removed 17% VAT off food and medical expenses. The 17% VAT was introduced by the election losers in 2010, and it was impeding poor people from the ability to have a nutritious and well-balanced diet.”