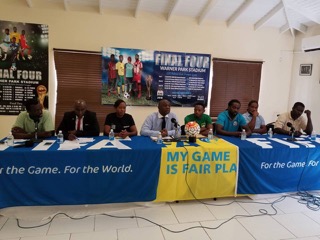 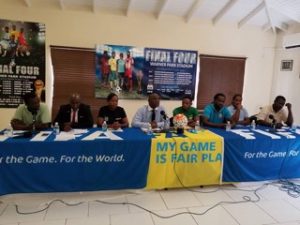 The four teams in this year’s Final Four Playoffs have all said they are ready to do battle. The playoffs got underway on Saturday June 2, and Rams Village Superstars emerged winners, defeating S.L. Horsfords St. Pauls 2-0, while Cayon and Conaree drew 0-0. Rams Village Superstars, Flow 4G Cayon Rockets, SOL IAS Conaree F.C. and S.L. Horsfords St. Pauls F.C. are the four teams in the playoffs that will rival for the St. Kitts and Nevis Football Association 2017/2018 title.

Leading the charts is the RAMS Village Superstars with 59 points, following behind is the FLOW 4G Cayon Rockets with 51 points, The SOL Island Auto Supplies Conaree and the SLH St. Pauls United with 50 points each. Despite points standing, it is still anyone’s game to dominate.

At a press conference on Friday, SKNFA President Mr. Anthony Johnson said that the final four playoffs is critically important as it comes at a stage when preparations are being done for the very first CONCACAF League of Nations.

He added: “This is an excellent opportunity for the players who will be on show to demonstrate their readiness to be selected for the SKN National Team.”

Rounding out the round robin matches on Sunday 10th June at 6pm will be SOL IAS Conaree F.C. vs S.L. Horsfords St. Pauls F.C and at 8:30pm between Rams Village Superstars and Flow 4G Cayon Rockets. The every exciting best of three finals between the two top teams will begin on June 17th and game 2 on June 20th.  If there is need for a game three, this will be played on Saturday June 23rd.

Meanwhile, at the press conference on Friday was Sabina Vaughn, a marketing officer with the SKNFA’s main sponsor: the SKN Anguilla National Bank. Ms. Vaughn disclosed that National Bank has arranged payment solutions so that patrons can purchase tickets, food and beverages using their debit/credit cards during the game. Patrons are encouraged to do so for a chance to win prizes compliments SKN National Bank. Fans and supporters are encouraged to come out to the games as early as possible and to support their team by wearing their colours and flags.