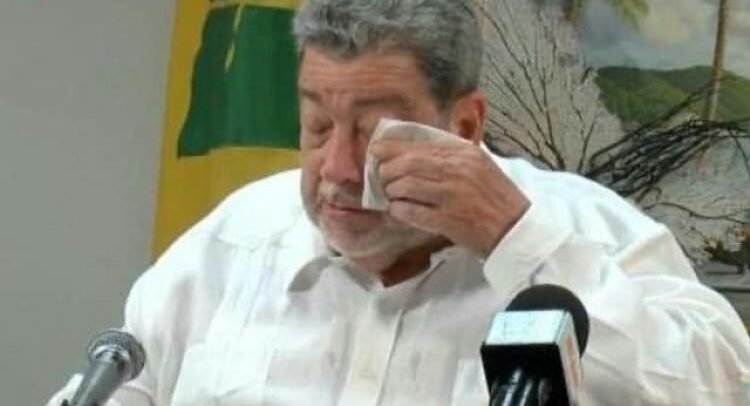 Basseterre, 10th April, 2021 (MyVue News.com)–The people of the Caribbean have endured a lot and the new disaster brought about by the eruption of the La Soufriere volcano in St. Vincent, on Friday, 9th April,2021, is simply the latest challenge, testing the resilience of the people.

While the Government of Prime Minister, Dr. Ralph Gonsalves has so far acted responsibly, he too has been left emotionally challenged, as many face the reality of, not only evacuation from the danger zone in the north, where the volcano is located, but also the possible exodus of Vincentians to neighbouring islands.

Offers have already come from Governments and private citizens in Barbados, Saint Lucia, Dominica and Antigua, where families have said they would open their homes to welcome their fellow Caribbean brothers and sisters.

The display of love and support has been so overwhelming, that even the towering figure of the longest serving prime minister of the Caribbean, was brought to open tears, in front of the media and audiences at home and abroad while speaking to the press on Friday.

“It’s weighing heavily on me and I pray daily…for the well-being of our people, particularly those who have been displaced.” said the prime minister.

Schools will be affected, jobs lost, homes potentially destroyed or may become inaccessible due to heavy ash fall.

He said the experience is going to be traumatic, and for some, it will take a toll on their health and quality of life. “This is going to be a long haul-it may go to 4 months, but we have to be strong,”said Gonsalves.

The Ministry of Health, with its experts in psychology and other relevant disciplines have been asked to be proactive on this front.

“It’s a huge operation which is facing us,” admitted the prime minister.

He continued, “I have asked the head of NEMO, (National Emergency Management Organization), not to penny penny-pinch” when it comes to caring for the needs of the people, especially those in shelters.

“Its gonna be costly, but I don’t want us to penny-pinch,” he repeated.

Already, a huge number of persons have been evacuated to homes of families and friends in safer zones and others have rented apartments and guest houses.

Some have carted their animals, appliances and whatever household valuables they could, as they make a desperate run to get out of the areas of danger.

Others are still trying to determine their next course of action, for them and their children and also the elderly.

Families who are sheltering evacuees will be assisted with food supplies, recognizing that they too would eventually feel the squeeze of the extra responsibility to feed their guests, stated the prime minister.

While some countries have agreed to accept Vincentians, “ Those countries not gonna accept you unless you are vaccinated, which is understandable, at a time of the (COVID-19) pandemic,” Gonsalves explained to his countrymen.

Those Vincentians who want to travel overseas, to Antigua, Dominica and Grenada, which are the first who said they are ready, would have to register to go, stated the prime minister.

At least three cruise ships are already present waiting for the order to proceed, but persons will not be staying on the ships. The ships are being made available only for transport to other countries. Only a skeletal staff is on board.

Within coming days, the prime minister cautioned that the situation could worsen. This is still the early days of the disaster. Even communities in safe zones will be affected eventually by the huge balloons of ash that have begun to cause health problems.

Telecommunications too, are already experiencing issues, as families try to make connection with loved ones and the authorities, to seek assistance.

One key element that is keeping hope alive, is that no loss of lives has so far been recorded and all Caribbean nationals and citizens of the world generally, have been offering prayers that it remains that way.

Powell nominates Richards to continue as Political Leader of PAM