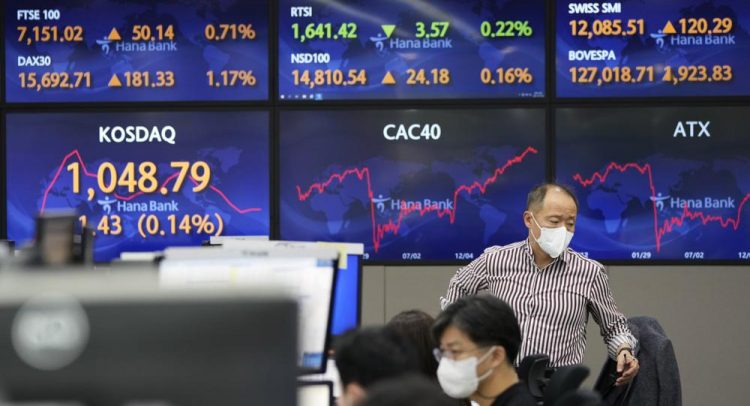 Stocks were broadly lower in early trading Thursday, as bond yields continued to fall and investors turned cautious after the market hit a series of record highs last week.

The S&P 500 index fell 1.3% as of 10:15 a.m. Eastern. The Dow Jones Industrial Average lost 1.1% and the Nasdaq composite was down 1.4%. Technology companies were having some of the biggest losses, which helped pull the Nasdaq composite down more than the broader market.

Bond yields continued to fall as traders worried that the Federal Reserve will start withdrawing some of its measures supporting the economy. The yield on the 10-year Treasury note fell to 1.30%. It traded as high as 1.74% at the end of March.

Investors have swung between enthusiasm about an economic recovery and unease that the Fed and other central banks might roll back stimulus to cool pressure for prices to rise.

Minutes from the Fed’s latest meeting showed officials are moving closer to reducing bond purchases, though most analysts don’t expect a reduction until late this year. At their previous meeting, policymakers said they planned to raise interest rates as soon as 2023, earlier than previously expected.

Bonds were falling partially after the number of Americans filing for unemployment benefits rose slightly last week even while the economy and the job market appear to be rebounding from the coronavirus recession.

Thursday’s report from the Labor Department showed that jobless claims increased by 2,000 from the previous week to 373,000. Weekly applications, which generally track the pace of layoffs, have fallen steadily this year from more than 900,000 at the start of the year.

Investors will be turning their attentions to corporate earnings starting next week, when the major banks like JPMorgan Chase, Goldman Sachs and Bank of America start reporting their results. Banks tend to be a proxy for the overall economy, so investors will be listening closely to see what the banks are seeing when it comes to lending and spending.

A currency trader passes by screens showing foreign exchange rates at the foreign exchange dealing room of the KEB Hana Bank headquarters in Seoul, South Korea, Thursday, July 8, 2021. Asian stock markets fell Thursday after the Federal Reserve discussed a possible reduction in U.S. economic stimulus and Japanese officials prepared to declare a coronavirus state of emergency during the Olympics due to a surge in infections. (AP Photo/Ahn Young-joon)

Firefighters douse ship that exploded at major port in Dubai