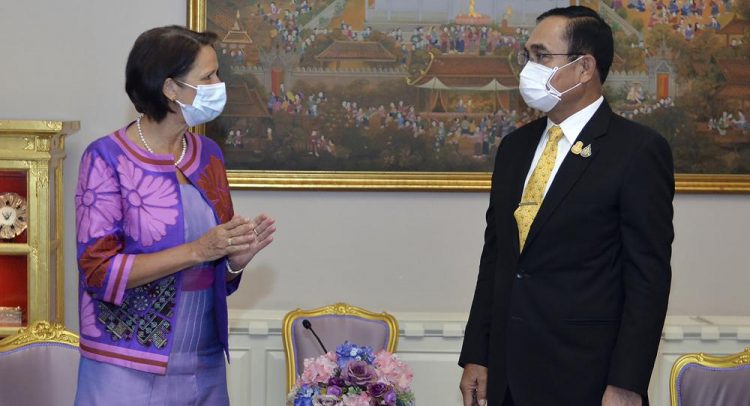 BANGKOK (AP) — Thai Prime Minister Prayuth Chan-ocha promised a United Nations special envoy on Friday that he will not force back people fleeing violence in neighboring Myanmar, where the military ousted a democratically elected government in February.

U.N. Special Envoy on Myanmar Christine Schraner Burgener told Prayuth in a meeting in Bangkok that she hopes Thailand will help find ways to work with Myanmar’s military to ease the crisis, the prime minister’s office said in a statement.

People across Myanmar have participated in massive protests against the military coup. A violent crackdown by the military has cost hundreds of lives.

The military is also battling ethnic guerrilla armies in border regions that are seeking greater autonomy from the central government and support the pro-democracy protesters.

Prayuth told Schraner Burgener that Thailand is closely monitoring the situation on the border with Myanmar and has prepared several areas to shelter refugees and provide medical treatment, the statement said.

Last month, several thousand villagers from Myanmar’s eastern state of Karen fled to Thailand following airstrikes by Myanmar military planes in territory held by the Karen ethnic minority. They were allowed to stay for a few days and then returned to Myanmar. Thai officials said they went voluntarily.

Refugee workers say most of the refugees hid out in the jungle and did not return to their homes. Close to 50,000 people are estimated to have been displaced by fighting in Karen areas since the beginning of the year.

The escalation of violence and the junta’s failure to restore order has led to fears that Myanmar could become a failed state, impacting neighboring Thailand and the whole region.

Prayuth told Schraner Burgener his government is ready to listen and exchange information about Myanmar, according to the statement. There was no immediate comment from the U.N. envoy.

Prayuth, a former army commander who also came to power by ousting an elected civilian government, is perceived to have a close relationship with the head of Myanmar’s military government, Senior Gen. Min Aung Hlaing.

Schraner Burgener has been based in Thailand since April. She says she plans to stay in the region in the coming weeks to remain in close contact with the Association of Southeast Asian Nations to support the implementation of a “five-point consensus” on the Myanmar crisis reached by its leaders at a special meeting in Jakarta on April 24.

Min Aung Hlaing’s government has since indicated it will consider the ASEAN agreement only after reestablishing stability.

While the junta’s use of lethal force to suppress mass protests has reduced turnouts at protest rallies in Myanmar’s cities and towns, the level of civil unrest remains high.

On Thursday, the junta announced the imposition of martial law in Mindat township in the western state of Chin, which borders India. The remote area has been one of the most militant in putting up armed resistance to the security forces, who have suffered casualties in almost daily confrontations.