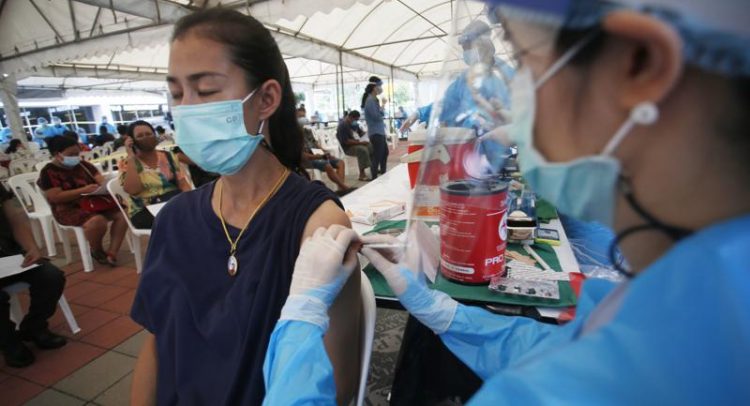 Thailand assures foreign residents they can be vaccinated

BANGKOK (AP) — Thailand sought Thursday to assure its foreign residents that they can get COVID-19 vaccinations, countering comments by some officials suggesting they would be at the end of the line for inoculations.

Opas Karnkawinpong, director-general of Thailand’s Department of Disease Control, made the pledge as Thailand fought to control an outbreak in the heart of its capital that has sickened thousands of people in the past month, Thais and foreigners alike.

He said at least 70% of Thailand’s population has to be inoculated to create “herd immunity” and that Prime Minister Prayut Chan-ocha “mentioned clearly that everyone on Thai soil, both Thais and foreigners, can access the vaccines.”

“Foreigners and diplomats will have the same criteria as Thais,” Opas said, adding that the country had a population of 67 million Thai nationals and 3 million foreigners.

More than 2.5 million foreigners in Thailand are from neighboring countries, including Cambodia, Laos and Myanmar. Many work on construction sites and in factories. The rest, about 200,000, are mostly professionals legally living in Thailand and retirees — from Australia, China, Britain, Europe, the United States and elsewhere.

Opas’ comments came after some health authorities had said foreigners legally living in the country would have to wait until the entire Thai population was inoculated to get shots.

With strict travel restrictions in place, many foreign residents would need to make time-consuming and expensive trips abroad to get the shots.

“We have followed international practice,” he said. “Thais and foreigners including diplomats will be treated equally. ”

China’s embassy in Thailand posted a statement on its website Thursday saying that Thai authorities recently agreed to vaccinate Chinese citizens beginning in late May as a gesture of friendship and cooperation against COVID-19, even though vaccine supplies are limited.

Asked about the statement, Thai Foreign Ministry spokesman Tanee Sangrat said he was unaware of any specific plans for vaccinating Chinese residents.

China has a policy of vaccinating its citizens abroad. There are an estimated 150,000 Chinese living in Thailand, the biggest group of foreigners aside from citizens of neighboring Myanmar, Cambodia and Laos, who are generally migrant workers.

Thailand has been very slow and haphazard in its vaccination rollout and showed no sense of urgency until early April, when new infections began sweeping through slums and low-income areas located in and around Bangkok’s central business district.

Less than 2% of all Thais have been inoculated for COVID-19, mostly health workers, but the government says it intends to vaccinate 70% by the end of the year.

Until recently, Thailand had relatively few cases and less than 100 deaths. It only signed deals for the local manufacturing of AstraZeneca vaccines in late 2020, choosing at first only to import China’s Sinovac vaccine.

The effort gained urgency as new cases surged to about 2,000 a day and deaths began escalating.

On Thursday, Thailand reported 1,911 new cases and 18 new deaths, bringing the total number of confirmed infections to 76,811, with 336 deaths. Of the total cases, 47,948 cases were since April 1, along with most deaths.

Thailand closed its borders to almost all travelers for months last year and it has been requiring visitors to the country to present tests showing they are not positive for COVID-19 and spend up to 14 days in mandatory quarantines.

The latest outbreaks are a big setback for plans to allow fully vaccinated foreign visitors to enter the country with no quarantine to help revive the devastated tourism industry. Nearly 40 million tourists visited Thailand in 2019, compared to almost none after the government ordered the airports closed to most international travel in April 2020.

Critics of Thailand’s handling of the crisis assert that local business interests played a role in delaying and limiting vaccination efforts.

Only three vaccines have been authorized for use in Thailand and only two have been administered so far: the AstraZeneca and Sinovac vaccines. The government now says it is trying to import U.S. and Russian-made vaccines, but they likely face a lengthy authorization process.

FILE – In this Tuesday, May 4, 2021, file photo, a health worker administers a dose of the Sinovac COVID-19 vaccine to residents of the Klong Toey area, a neighborhood currently having a spike in coronavirus cases, in Bangkok, Thailand. Thailand sought Thursday, may 6, 2021, to assure its foreign residents that they can get COVID-19 vaccinations, countering comments by some officials suggesting they would be at the end of the line for inoculations. (AP Photo/Anuthep Cheysakron)