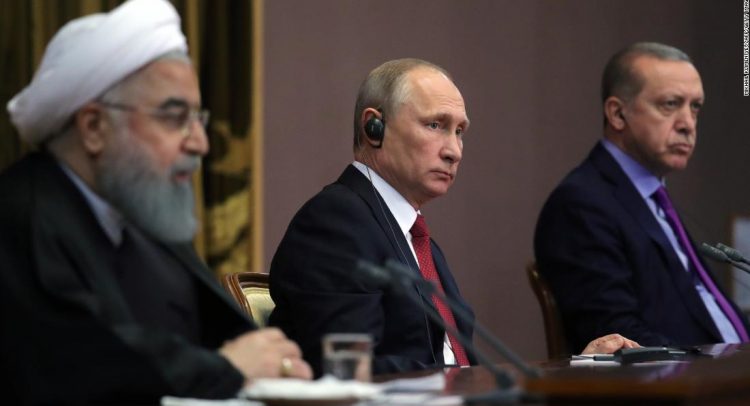 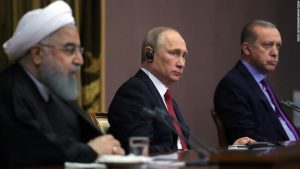 Despite the eagerness to declare it ebbing, Syria’s war is unlikely to get closer to its end simply because Vladimir Putin, Recep Tayyip Erdogan and Hassan Rouhani are meeting in Ankara this week.

Yes, these leaders represent the three largest foreign military forces operating now inside Syria, excluding the US, whose commander-in-chief said late last week that America would soon be letting “others” take care of Syria. But Russia, Turkey and Iran meet without the contribution of a reasonably important factor in this ghastly experiment in human cruelty: Syrians.
You can argue that the regime in Damascus will do what Tehran or Moscow tells it to. But the prospect of Russia, Turkey and Iran agreeing what a new status quo inside Syria should look like is a short-term stopgap at best, and one that overlooks the underlying and unresolved causes of the war.
The accepted premise of this trilateral solution is that Iran and Russia are content that the regime has full access to the coast and a clear channel all the way to the Iraqi capital Baghdad — through which Tehran can slowly harass Israel and dominate the region, and Moscow can retain an airbase on the Mediterranean.
Turkey is meant to be happy as its proxies control the area west of the Euphrates Rivers along to Idlib, and provide a space for Sunni militants to create their own communities into which millions of Syrian refugees currently in Turkey might return.
The unspoken annex to this is that the Americans retain adequate firepower and influence in the northeast for the area to remain a de facto Syria-Kurdish enclave for the years to come.
Share this article:
Previous Post